AMD’s new architecture “Bulldozer” FX-series CPUs released almost two weeks ago, and ABT has been non-stop evaluating the “Zambezi” 8-core flagship FX-8150. We naturally want to know if it is a good upgrade from AMD’s aging Phenom II architecture, and we have already compared its performance to our overclocked 980 Black Edition also on the AM3+ platform, and also to our overclocked Intel Core i7-920 on the LGA-1366 platform.

This Part Two contains the conclusion to AMD’s FX-8150 vs. Core i7 & Phenom II – Bulldozer Arrives! We concluded that FX-8150 once overclocked, was quite competitive with the overclocked to 4.3GHz Phenom II 980 BE but still fell a bit behind the Core i7-920 at 3.80GHz in gaming with a single HD 6970. Unfortunately, we were suspicious of our CrossFired HD 6970s low scaling results when compared to our other CPU platforms but we didn’t have time to test any further and so were not able to give an overall conclusion about the FX-8150’s ability as a gaming CPU.

This time, we received our ASUS CrossHair V replacement motherboard, and there were no issues whatsoever – even using hot-running HD 6970-X3 (880/1375MHz) Tri-Fire and FX-8150 overclocked to 4.4GHz with multiple power supply units (PSUs). This motherboard is amazing. It is an overclocker’s dream and we found excellent features and great stability. Best of all, this AM3+ platform also supports 16x+16x PCIe bandwidth for multi-GPU CrossFire or SLI. We soon hope to bring you GTX 580 SLI and HD 6970-X4 Quad-Fire results!

We soon discovered that the FX-8150 has two personalities – much like the HD 6990. At its stock speeds of 3.6GHz, it is mild-mannered and uses power at a reasonable draw but its performance is somewhat muted – even compared to Phenom II architecture. And when overclocked, its performance increases sharply but at the cost of high power draw and heat. Unfortunately, we only compared our stock FX-8150 to the overclocked-to-4.3GHz Phenom II without looking at the older CPU’s performance at its stock speed of 3.7GHz.

The shortness of time for the evaluation was our main issue and the stock FX-8150 looked good against the overclocked Phenom II on paper as Turbo Core will extend the FX-8150’s core speed to 4.2GHz. As it turns out, we were over-optimistic about Turbo Core performance gains in gaming. First, let’s again look at what it does. 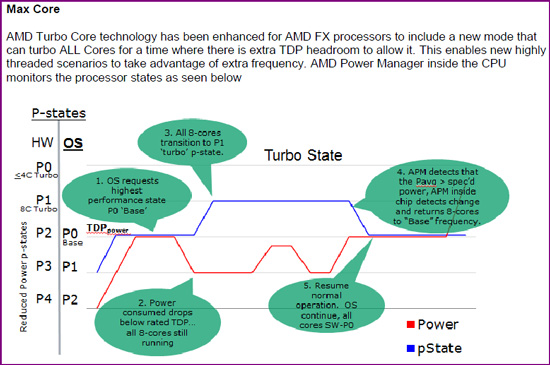 One impressive new feature that appears to work well in practice for some applications is AMD’s Turbo Core technology. It is far more sophisticated than similar technology used in their 6-core Phenom IIs. It allows for the FX-8150 to increase from 3.6GHz to 3.9GHz across all eight cores, and a further double-boost on 4 cores to 4.2GHz if TDP headroom allows it. Generally the boost effect can range from instantaneous to over a longer period, depending on the thermal situation as shown in the chart below.

Of course, this could give some significant performance improvements as AMD’s internal testing shows. However, notice that not one game is given as an example of Turbo Core technology providing gains.

In our own further testing, an issue that we discovered in gaming is that the FX-8150 actually rarely boosts to 3.9GHz for long periods – nevermind to 4.2GHz – probably because of the lack of thermal headroom with our CPU air-cooling solution. So when we compare our FX-8150 to Core i7-920 at 3.8GHz and Phenom II 980 BE at 4.3GHz, we are comparing them to a stock FX CPU that is mostly running at 3.6GHz in gaming. This was also evidently an issue with our FX-8150 CrossFire scaling compared to the other overclocked CPUs.

We used the older but still-decent CPU cooling technology, Thermalright Ultra120 Extreme with a single Scythe 12omm cooling fan to cool our FX-8150. For this part two, we added a second 140mm fan in push-pull to the CPU cooler to give us a few degrees more of cooling headroom. However, in reaching our 4.4GHz overclock, power usage and heat went way up and we were very glad we switched from our relatively cramped Cooler Master Elite 430 mid-tower case in Part 1, to our spacious new Thermaltake full-tower Chaser Mk I which we will evaluate separately.

In fact, to make our FX-8150’s overclock completely stable with overclocked HD 6970-X3 Tri-Fire, we had to switch from using two 775W PSUs together, to using a 850W PSU together with a 775W unit! The 775W PSU is dedicated to powering the PCIe cables to the HD 6990 and the HD 6970 in CrossFire while the 850W unit supplies power to the PC including the overclocked FX-8150, the case fans, optical drive, HDD and to the two PCIe slots (75W each)! 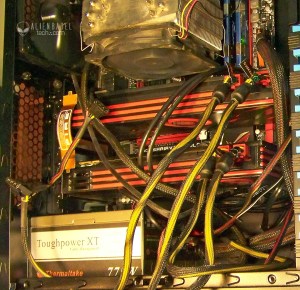 We can hardly wait for gaming in Winter with HD 6970 Quad-Fire and water-cooled FX-8150 – there will be no need for a space heater. To run Quad-Fire, there would be another HD 6970 sandwiched in-between the HD 6990 on top and the HD 6950-flashed-to-6970 on the bottom. Water-cooling is probably necessary in this kind of situation as the heat from the four GPUs rises straight up to the CPU – even in a superbly ventilated case like the Thermaltake Chaser Mk I.

We already introduced the new FX Bulldozer architecture here. We apologize for the state of some of the images and the general lack of time that we had in writing our evaluation due to hardware issues. However, we want you to know that ABT is a primarily a game-oriented tech site and we intend to highlight and emphasize performance in at least 20 modern games by using resolutions and maximum detail settings that gamers actually play at. Instead of returning to non-gaming tests, we are going to carry on with further important tests to determine if the FX-8150 is a decent gaming CPU or not.

We ran synthetic and real world benchmarks on our stock-clocked and overclocked FX-8150 with the overclocked Core i7-920 taking most of them and the overclocked Phenom II and FX CPUs fighting it out for second place. Since our main emphasis will always be on gaming performance, we will continue to spend our time working to establish FX-8150’s performance in games when paired with a single HD 6970 and also with HD 6970 CrossFire-X2.

Since we had questions about CrossFire scaling with our stock FX-8150, we took it a step further and ran HD 6970-X3 Tri-Fire to see if this CPU has what it takes with relatively high-end graphics. And we also tested with the FX-8150 at the stock 3.6GHz with Turbo Core on and also at 4.4GHz with Turbo off. In this way, we will see if the FX-8150 is worth the $245 that AMD is asking for it for gaming. 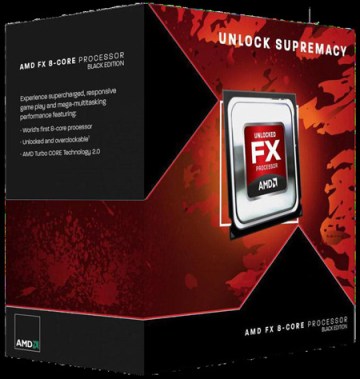 We noticed that AMD positioned FX 8150 against Intel’s enthusiast CPU line-up and directly against the upper-midrange Core i5-2500K. Considering that AMD is introducing their new flagship processor at $245, we can expect that its performance should be between the i5-2500K and i7-2600K.

We want to note that we did not test with Core i5-2500K. Instead, we used an overclocked-to-3.8GHz i7-920 which is solidly faster than Intel’s current fastest quad-core on the flagship LGA 1336 Platform – Core i7-960 at 3.2GHz. Our CPU would be comparable in performance at least to a stock i5-2500K in gaming – exactly where it is positioned against the FX-8150.

Here is how AMD visualizes their line-up. Although they say it is not indicative of performance positioning, it generally is. You may also notice that AMD does not include Intel’s highest end LGA 1366 platform – one that Intel will again lock down at the high end when Sandy Bridge-E launches later on next month. 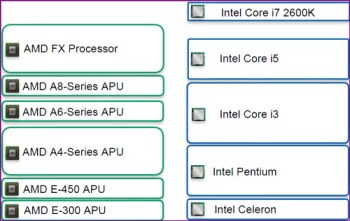 Please continue on to the next page for the complete hardware and software setup of our platforms – AMD’s FX-8150 versus Phenom II 980 BE versus Intel’s Core i7-920. And this time, our FX-8150 is overclocked as it takes on HD 6970-X3 Tri-Fire. We shall see what happens when high performance CPUs meet fast graphics in the Autumn of 2011.