Antec is one of the big name manufacturers in the computer case industry today. Their Antec 900 and 1200 cases have been loved and admired by many enthusiasts. Antec also makes quality power supplies. Based on their success with enthusiasts with the Antec 900 and 1200 cases, they are trying something different with the Skeleton. This case is more of a testbed station rather than a traditional case. To show you what I mean, have a look at the image below: 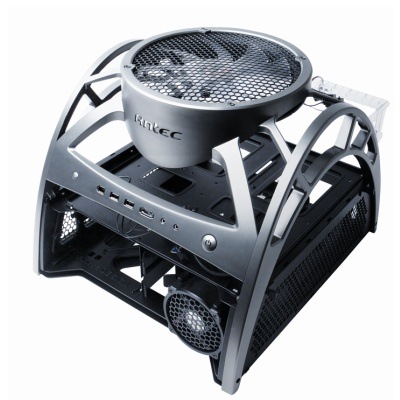 See why it is named Skeleton. Its basically a testbed with a skeleton of framework thrown around it to support the massive 250mm fan on top.

Founded in 1986, Antec, Inc. is one of the top manufacturers in the high-performance computer components and accessories for the gaming, PC upgrade and Do-It-Yourself markets. Antec has also achieved great success in the distribution channel, meeting the demands of quality-conscious system builders, VARs and integrators.

Antec’s offering of enclosures includes a wide range of cases, such as its advanced Performance One Series, economical New Solution Series and VERIS family of media components designed for the home theater PC market. Antec’s products also include front line power supplies, such as its premium Signature Series, powerful TruePower Quattro Series and EarthWatts, one of the most environmentally friendly power supplies available. PC gamers are an increasingly significant consumer of performance components, and many Antec products are designed for the gaming demographic, like the premier gamer enclosure: the Nine Hundred. Antec also offers a line of computer accessories comprising many original products, including its patented LED fans and notebook cooling solutions.

Antec is headquartered in Fremont, California, with additional offices in Rotterdam, The Netherlands, as well as in the UK, Germany, France, Spain, Italy, China and Taiwan. The company’s products are sold in more than 40 countries throughout the world.