First Exclusive Details and Images of the unreleased HD 5870

AlienBabelTech is proud to be the first with a photo of the not-yet-released, under-NDA, HD 5870 here this morning

There is a new feature that is called “eyefinity” which means that three LCDs can be simultaneously supported at 2560×1600, with options for future cards to support up to six LCDs!

The HD 5870 die size is slightly over 330 MM2 and packed with over 2 billion transistors.  This translates into one beast of a card with just over 150 GB/second bandwidth.  It is very likely that the 8X + 8X PCIe CrossFire slots of the new p55 motherboards for Core i5 will become saturated with two of them.

What is outstanding is that we are hearing that the HD 5870 will perform at just under 28 watts at idle and peak below 190 watts maximum!!  That is quite a challenge for Nvidia  to meet or beat in their own upcoming GT 300 series as the performance to watt ratio is outstanding.

What is also new to watch for in the HD 58X0 series besides its DX11 capability is that there is a new AA/AF algorithm, where everything on the render back end has been doubled. As a benefit for gamers, that means much less of a performance hit when going from no AA to 4xAA or perhaps even from 4xAA to 8xAA.

Finally, you can expect the HD 5870-X2 to be released in the second half of October.

You heard it here at AlienBabelTech first.  And we also think that you may be pleasantly surprised when you actually get your hands on one.

Here is another pic of HD 5870 that we snagged off the Internet for you – but not exclusive like our first one this morning: 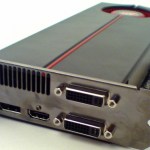