As the main intended use of G210 is for HTPC, readers will be looking to see how hot this GPU gets. Let’s take a look. We fired up our freshly downloaded copy of Furmark 1.7.0 and rendered the fur at 640×480 with no AA.

Furmark represents one of the most intensive tests a GPU can run. Thus temperatures and power consumption measured with Furmark represent the worst-case scenario. Although no game today puts as much load on the GPU as Furmark does, should a game do that in future, you will be ready armed with the knowledge gained by testing with Furmark – knowing how hot your card can get and how much power it can consume.

According to its developer, “Furmark is a very intensive OpenGL benchmark that uses fur rendering algorithms to measure the performance of the graphics card. Fur rendering is especially adapted to overheat the GPU and that’s why FurMark is also a perfect stability and stress test tool (also called GPU burner) for the graphics card. This benchmark requires an OpenGL 2.0 compliant graphics card: NVIDIA GeForce 5/6/7/8 (and higher), AMD/ATI Radeon 9600 (and higher) or a S3 Graphics Chrome 400 series with the latest graphics drivers.” 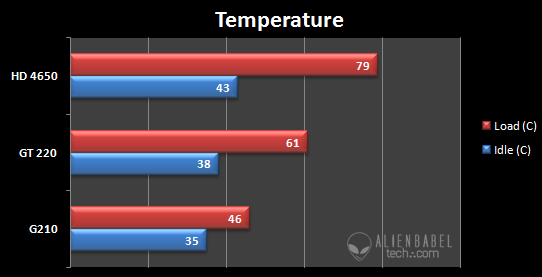 Readers will be pleased to know that the G210 is a very cool card, even under Furmark load. The G210 shouldn’t get this hot in HTPC systems which means that you can compromise on the airflow and build a quiet HTPC system around it.

Furmark Stability test was used to find the maximum stable overclock. We used EVGA’s Precision Tuner for overclocking. After all the dust was settled, here are the overclocked frequencies.

The GT220 showed impressive gains on its core and shaders with nearly 33 % improvement.

Furmark 1.7.0 was run in extreme burning mode with the fur rendered at 640×480 with no AA. Measuring power usage with Furmark is the worst case scenario. Normally games are never able to put so much load on the GPU as Furmark does.

I was a little disappointed seeing the power consumption of these new cards when compared to a HD 4650, considering the difference in fab process (40nm vs 55nm). But the G210 is an interesting little card. You can build a HTPC box around it that consumes around 70-75W during video playback.