Race Driver: GRID is the latest addition to the TOCA Touring Car series by Codemasters. GRID is a hybrid between arcade and simulator of mainly road racing that consists of 43 cars featuring very fast racing, awesome graphics, along with a great damage model that leads to some of the most fantastic crashes we have seen in a game. There are several types of competitions for different cars: GT races, open wheel races, demolition derbies, etc.  There are also several tracks from different countries, including Japan, the United States and European tracks, such as Le Mans and Spa Francorchamps.  A track racing through the streets of Milan is also available.

I use the GRID Demo v1.1 for the benchmark. I take the first place in the first lap and use the second lap for benchmarking purposes.

Here are the settings we used: 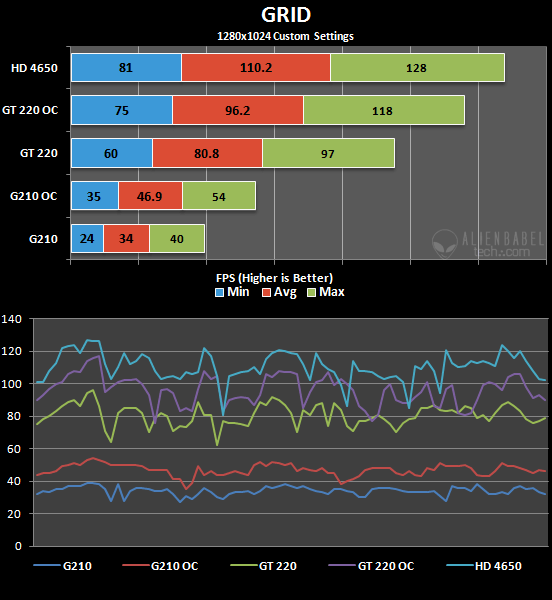 The G210 is able to provide smooth playable framerate in this game albeit at the lowest settings. The GT 220 fares a lot better, more than doubling the performance of the G210 but that is to be expected considering it has 3 times the shaders of the G210. You should be able to play the game at higher quality settings on the GT220 easily.