AMD/ATI has been busy recently launching one card after the another. First they launched the high end HD 5870 and HD 5850 accelerators. Few weeks later they launched the more mainstream oriented parts in the form of HD 5770 and HD 5750. Recent reports have given birth to fresh speculation when new device IDs were found in leaked drivers

There was speculation that these upcoming HD 5900 series could be a chip refresh just like HD 4890 was to HD 4870.  But our sources tell us that ATI has decided to drop the “X2” nomenclature and its upcoming dual GPU-on-a-PCB cards. The card that was supposed to be HD 5870X2 will now likely be called the HD 5970 and the HD 5850X2 will probably be called the HD 5950. These cards will be much like their older brothers, the HD 4870-X2 and the HD 3870-X2, featuring two GPUs on a single PCB and employing onboard crossfire support. They will undoubtedly take their place as the top two performing cards in ATI’s evergreen lineup upon release.

Our source who wishes to be known as DJ (kind of ironic that Nvidia leaks come for a source named CJ!) tells us that ATI is pretty confident that they will win this round of the GPU war with Nvidia’s Fermi architecture. He goes on to say that ATI has something special up their sleeve, but are waiting for Nvidia to release their DX11 cards first. All I can say is that although the above information may be correct in due time, at the moment it should only be taken as unconfirmed rumor so as to avoid flamewars in forums around the ‘net over who wins this round between ATI and Nvidia.

DJ was kind enough to provide us with a glimpse of the performance to expect from this card when it releases. The drivers used are unknown at this time, but the GPU-Z shows as 8.14.10.708 version for the Direct3D driver. It is unclear whether these are the leaked Catalyst 9.11 beta drivers or some other special drivers made for this card. A quick glance at my Catalyst 9.10 installation shows version 8.14.10.700 for the Direct3D driver.

Other information that maybe of interest to some is that the fan runs at 4700rpm at 100% speed.

—-Editor’s Note:  These benchmarks of an unreleased engineering sample have been removed at AMD’s request and are not at all representative of final hardware’s performance.  AMD was quick to let ABT know that the board, the drivers and the BIOS are not finalized.   Also, please note that according to AMD, the following leaked pictures are not the final card as this is an engineering sample.

And here are the pictures of the card itself in an Antec 1200. The card itself is 13.5 inches long, and has problems fitting even a full sized tower case like the Antec 1200. We are told that it is not possible to put a hard drive next to the card in this case. The card uses one 8-pin and one 6-pin power connector. 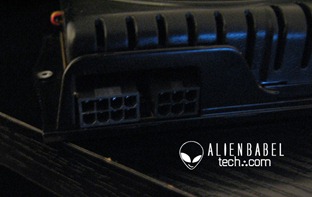 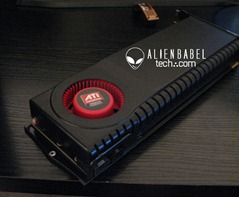 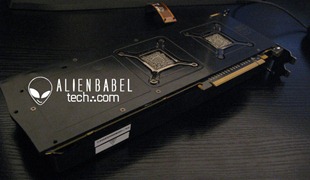 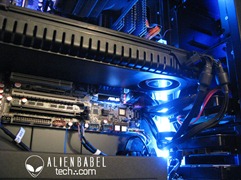 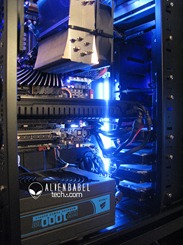 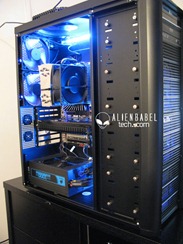 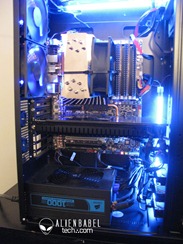 Oh, and we are told that for being patient little enthusiasts, we should get our board shots in a few days. In the end I would like to emphasize that this performance preview is probably with very early drivers. So expect the card to perform even better when it launches with official drivers. Since this is early sample hardware, the specifications like clock speeds could change by the time it is released officially.