This SSD evaluation is going to focus on advantages for gamers with Kingston’s new budget-oriented consumer SSDNow V300 as it compares to their last generation V200 series and even to their more expensive enthusiast-grade HyperX SSDs. Over two years ago, we concluded that Kingston was making performance progress with their SSD lineup and in each follow-up review since then, we have found performance increases.  This time promises even greater improvements as it is the first time that Kingston is using a custom LSI SandForce controller and new Toshiba memory for its SSDNow V300 series. 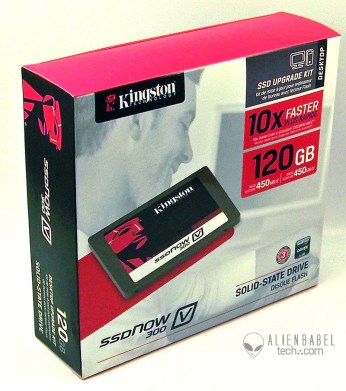 This is ABT’s sixth SSD evaluation and we are now going to continue to look at the performance differences within the Kingston SSD lineup while focusing on the new SSDNow V300 120GB SSD.  Just as with the last SSD evaluation less than a month ago, our test bed uses Ivy Bridge, Intel’s latest consumer and enthusiast platform, a mechanical 500GB Seagate Barracuda hard drive, two HyperX SSDs and a SSDNow V200 SSD. 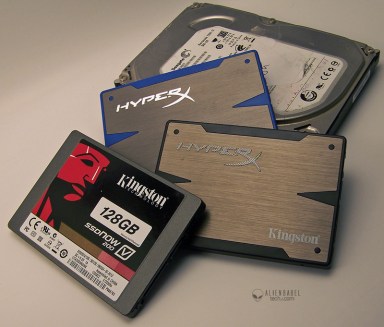 We are using our Core i7-3770K and GTX 670 at stock settings on a EVGA Z77 FTW USB 3.0/PCIe 3.0 to once again test the differences between this new V300 drive and our other drives pictured above. Kingston offers two basic consumer lines – their Kingston HyperX SSD for the enthusiast who wants extreme performance, and their VNow lineup which offers more budget-oriented performance. We will be evaluating the 120GB version of Kingston’s latest SSDNow V300 (SV200S37A/128G).

All of these drives differ from each other in price and in capabilities – you will pay approximately $100 for a 120/128GB Kingston SSD and $200 to $400 for 240GB to 256GB Kingston drive. The standalone version of this new SSDNow V300 120GB drive is at time of writing, $109.99 at Newegg.com with free shipping.  The notebook version of the desktop bundle that we received from Kingston is ten dollars more but we couldn’t find the desktop version of the bundle as it is still quite new.

The 240GB HyperX SSD is Kingston’s fastest SSD and it costs $408.211 at Amazon. Both of the HyperX SSDs include Kington’s “upgrade kit” – bascally the same as the SSDNow V300 desktop bundle kit sans screwdriver – which include Acronis cloning, backup and imaging software as well as hardware to make migrating to SSD from a hard disk drive, painless. Stand alone versions of Kingston SSDs generally cost about $10 less than the upgrade kit at retail.

Kingston SSDs feature an independent garbage collection function that maintains a system at optimum performance level. This is especially important for systems running on Windows XP or other OSes which doesn’t feature TRIM, and it will also help organizations extend the software cycle on their systems, delaying upgrades of operating systems and compatible applications.

The features and benefits of the SSDNow series extend to all Kingston SSDs. Two major benefits should be noted especially for notebooks – power savings and durability. A SSD uses significantly less battery power than a HDD and is also less prone to failure from dropping it. 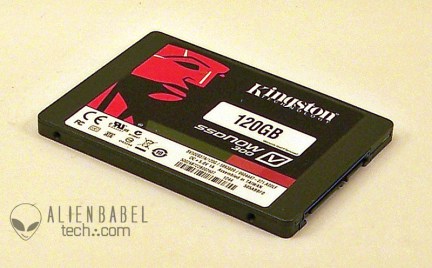 Kingston’s SSDNow V300 solid-state drive is a cost-effective way to revive your computer. It’s 10x faster than a hard drive plus more reliable, more durable and shock-proof. It features an LSI® SandForce® controller customized for Kingston and best-in-class components, and is available in kits with all the accessories needed for an effortless transition to the latest technology. For added peace of mind, it’s backed by a three-year warranty, free technical support and legendary Kingston® reliability.

New controller and memory in V3oo

There is actually 128GB of total NAND flash memory (16x8GB) but 8GB are reserved for over-provisioning.  Once formatted, this 120GB advertised capacity drive has about 112GB of actually available capacity.

Instead of concentrating on the technical, we are going to be looking at the advantages that a PC gamer might have using a SSD over a fast mechanical hard drive. And of course, we will compare the Kingston consumer SSDNow V300 line with the (now) older V200 series and the current and more expensive HyperX 3K and HyperX SSDs.

Since our last SSD evaluation in November, we have upgraded all of our results with Sisoft’s Sandra 2013 from the 2012 version and we have added three new benchmarks with the SSDNow V300 versus the mechanical Seagate Hard Disk Drive (HDD) that will particularly interest gamers – (1) Crysis game level load times, (2)the time to install GeForce 306.97 drivers, and (3) the time to unpack for installation, 15.3GB of Assassin’s Creed 3’s .rar files. This may give us a practical reason for upgrading to a SSD over a HDD – or not.