PCMark Vantage is a PC benchmark suite designed for Windows Vista and 7 that offers one-click simplicity for casual users and detailed, professional grade testing for industry, press and enthusiasts. A PCMark Vantage score is a rough measure of your computer’s performance across a variety of common tasks. The measurement for the PCMark Vantage hard drive suite is the total score with the scoring for each test further broken down. There are a total of eight hard drive tests within PCMark Vantage and all eight are run to measure the relative performance of the SSD vs the HDD we tested.

The HDD Test suite in PCMark Vantage consists of the following 8 tests and we are going to be paying particular attention to the disk drive tests:

Now we run the same benchmark suite with our Kingston SSDNow V300 but we pay particular attention to the drive scores. 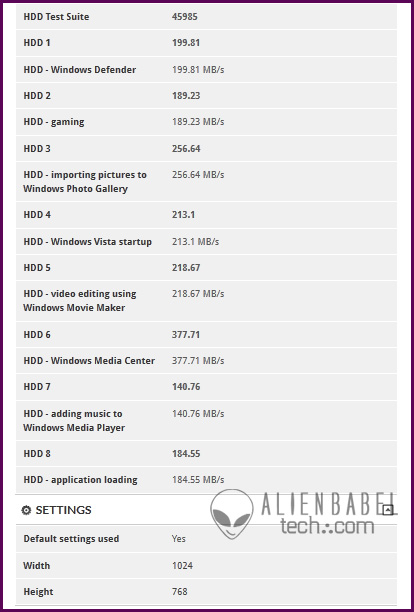 If you want to compare these detailed scores with the HDD and the other Kingston SSDs, check out our last evaluation which uses exactly the same test bed and conditions.  Here are the overall scores expressed in a chart: 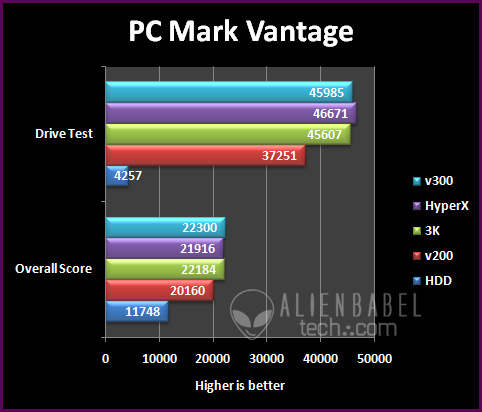 In all cases, the SSDs are faster with PCMark Vantage than with the mechanical hard disk drives and the HyperX drives are faster for some applications than the older SSD VNow 200 series but not the new SSDNow V300.

We also see from the chart above that the kind of drive used in the benchmarking will affect the final score of most benchmark suites but we have to look at the actual drive test to see the differences between SSD performance.

PCMark 7 is Futuremark’s updated verion of our last benchmark suite but for Windows 7.

Just as the overall score is affected by the drive used in Vantage, the same applies to PCMark 7. The standard version of the suite does not give a breakdown score for the SSD/HDD tests. Here is the overall chart. 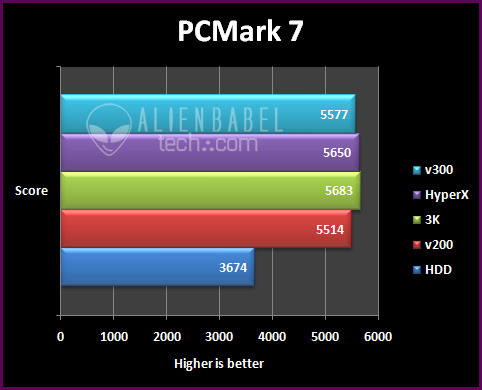 As in all synthetic suites, the overall score depend a great deal on the drive used. However, there is not a lot of difference in the scores between a consumer SSD and a high-performance enthusiast drive running the entire benchmark suite.

SANDRA, short for the System ANalyser, Diagnostic and Reporting Assistant is an information and diagnostic utility. It provides a tremendous amount of information about every hardware and software component in your PC. It also provides various benchmarks including for measuring and reporting disk performance. 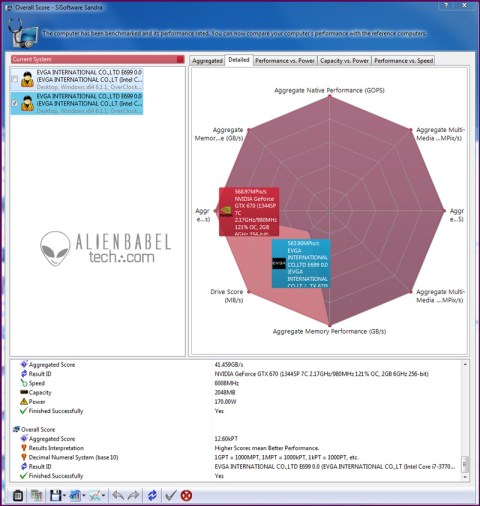 Although we used the last verson of 2012 in our last SSD evaluation, SANDRA 2013 came out last month and we have updated all of our SSD benchmarks for this current SSDNow V300 evaluation.  Sandra 2012’s overall benchmark score is generally higher than the overall Sandra 2013 score. We find Sandra 2013 is an incredibly useful suite which we use regularly as a diagnostic utility.

Here is a summary chart of SANDRA 2013’s benchmarks: 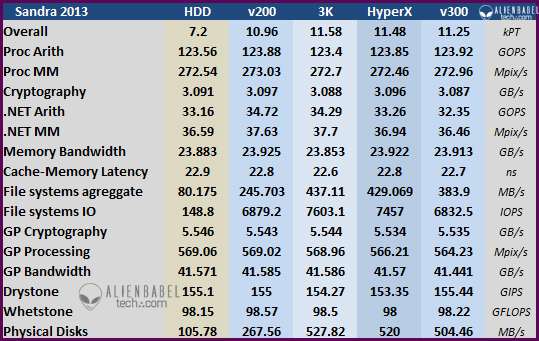 As usual, all SSDs are significantly faster that the HDD for synthetic benchmarking when benching physical disks and file systems; very little else is affected. We do see huge differences between the HDD and the SSDs and although the HyperX SSDs are faster than the VNow 200 series the performance gap is nearly closed by the new Kingston VNow 300 series. Let’s head for real world testing.