If you have been following ABT, you will notice that we let the cat out of the bag a few months ago when we posted the “Patriot Torqx M28 256 GB SSD Unboxing and Performance Preview” article. In there we gave you a look at the Solid State Disk (SSD) we have been testing for the past few weeks and a real world performance preview. In this article we will delve deeper into the underlying architecture of a Solid State Drive (SSD) and see what makes it tick.

Since we posted that article a few months ago, a lot has changed which was the reason for delaying this article. When I was originally ready to post the results, Patriot informed me that they were very close to releasing a new firmware for the SSD that would support TRIM command. I decided to delay the article and test the SSD again with the new firmware and post the new results as well.

Over the course of next few pages, I’ll try to explain as best I can what makes a SSD function, what is the underlying technology. We’ll see how data is written and read and then I will round it off with the benchmarks. I will try to keep the explanation as simple as possible, as I remember how empty I came away after the first time I tried to read the SSD technology due to the technical jargon. To make it easy on our readers so as to understand the working of the technology, I have made diagrams to explain the processes.

So the basic premise comes to this: 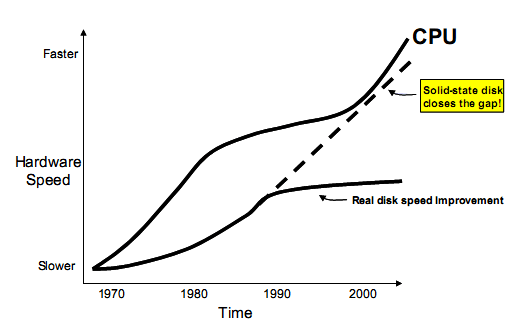 In the past few years while the CPU has been increasing in speed, one component that has not advanced at the same rate is the storage sub-system. While CPUs have evolved to process the data in nanoseconds, the time taken for accessing the data off of the hard disk drive is still measured in milliseconds. Although small in essence, it is still quite large compared to the time it takes for the CPU to process the data.

Eventually you may be running the latest brand spanking new 8-core processor in the near future with 2000 MHz DDR3, but the one thing that will be holding you back will still be your mechanical storage. As we found out in our Preview article, that the performance nearly doubled in some cases by just upgrading the storage system.

Let’s start by learning how a SSD works.