We received the Frio and Frio OCK CPU coolers from Thermaltake for evaluation at the end of last year.  Previously we had issues with reaching speeds over 3.8GHz with our Core i7-920 using our Noctua NH-U12P SE2 CPU cooler.  Now that we are testing faster and faster graphics including the GTX 680, we feel the pressure to increase the speed of our CPU and this is our adventure in overclocking it further.

We have had our Intel Core i7-920 CPU/Gigabyte X58MB for 2-1/2 years and we were originally doubtful that we could reach our goal of 4.2GHz which would allow us to set our aging Core i7-920 right alongside a mildly overclocked i7-2700K in terms of performance.  Would the new Thermaltake Frio or Frio OCK help us to reach our goals?

The 5-heatpipe Thermaltake Frio (below, right) is $58.99 at Newegg.com.  The 6-heatpipe Frio OCK (below, left) is currently $77.99 at Newegg and it compares in price with our Noctua NH-U12P-SE2 at Newegg for $72.99.  Both of these Thermaltake coolers are ready for the 6-core Intel CPUs and neither of these coolers are considered budget by any means while the Frio OCK (and the Noctua) is aimed at the higher end of air coolers. 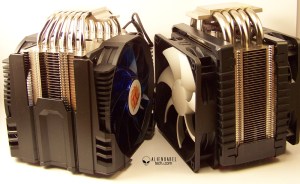 As important as saving money on hardware is, this editor believes that the choice of a CPU cooler is critical to any PC build. The cooler should never be cheap or retail. Too much depends on it if you value keeping your CPU cool or especially if you plan to overclock. It is highly recommended that you instead look for sales and use rebates to save money. 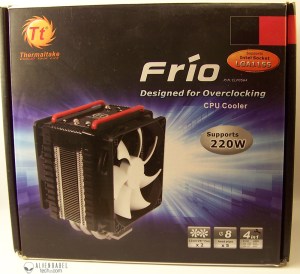 This review is not just about “value”.   If you want to cool a Phenom II X4 or even an X6, a value CPU cooler such as a Coolermaster Hyper N 212+ will suffice.  Even Intel Sandy Bridge CPUs such as Core i5 and Core i7 run relatively cool until you begin to push the core speeds up to 4.5GHz or so.  Unless you are supplying a relatively high voltage to most CPUs, a budget cooler will work nicely.  Even stock heatsinks are evolving to keep up with the hotter running quad-core and hex-core CPUs.   Of course, the FX series of AMD CPUs almost require watercooling or a high-end air cooler and a very beefy power supply unit (PSU) if you are really serious about a Bulldozer overclock in excess of 4.4GHz as we were.

Both Thermaltake Frio boxes advertise “Designed for Overclocking” and we can expect that the Frio OCK is going to be more efficient as it uses 6 heatpipes and supports 240W TDP CPUs compared to 5 heatpipes and 220W for the Frio.  How does this affect practical overclocking of our Core i7-920?  Are we able to beat the cooling of our current Noctua cooler which allows us to clock confortably to 3.8GHz? 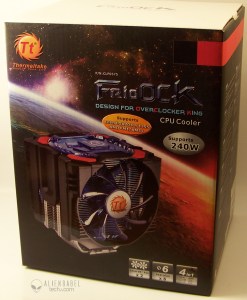 Intel’s newest Core i7 and i5 CPUs mark a new and exciting advance in processing power, but they definitely require a higher quality heatsink than for our older Core2Duo or Core2Quad CPUs or for overclocking our older AMD Phenom II 980 BE X4, especially if you want to cool them without excessive noise.  Our test CPU, the Intel Core i7-920, also requires excellent cooling once you approach 4.0GHz as its stock clock is only 2.66GHz.  Thermaltake offers an easy entry into the world of premium air cooling with the Frio and/or Frio OCK, both of which are each complete packages that offer everything you need to cool your overclocked CPU, including thermal paste. 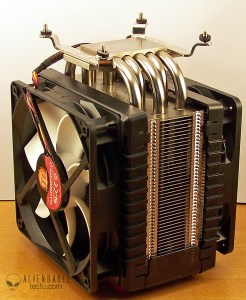 Heat is drawn away from the CPU by the base of the heatsink and is transferred up into the array of hi-grade aluminum fins for dissipation. Two large 120mm fans spin – one on each side of the heatsink fins array in a “push-pull” configuration, blowing CPU-heated air through and away from the heatsink.  There is also a manual rotary switch at the end of a short cable that allows you to max out the fan’s rpm if you need them.

The Frio ships with a Thermaltake multi-socket mounting system that has an easy and very straightforward installation while the Frio OCK is quite different and a bit more complex for our Intel LGA1366 platform.  They are also adapted for 1156 and 775 platforms and Intel’s latest extreme 6-core CPUs as well as AMD socket AM2, AM2+ and AM3/AM3+ platforms. A small tube of Thermaltake’s thermal compound is included.

Before we compare these coolers to each other and to the Noctua cooler, let’s unbox, install, and test them individually using OCCT 4.1 as an extreme test to load all the cores of our CPU at 100%.