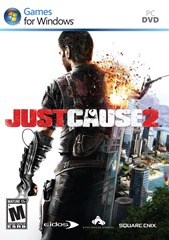 A heated exchange of gunfire finds you hopping into an enemy jeep and speeding off, only to get chased relentlessly. The heat on you is increasing and you end up on a mountain road with your chances of survival dwindling away. As your enemies close in on you, you send your vehicle careening off the mountainside in an apparent suicidal attempt at freedom. At the last instant, you yank the cord that rests close to your chest and release your parachute just in time to glide away from the fireball that is now your vehicle. Your defeated pursuers look on in despair and disbelief as you sail away into the sunset.

Welcome to my PC review of Just Cause 2.

This is just an example of the kind of action this game dishes out on a regular basis on the fictional tropical inland of Panau located in south-east Asia. Rico Rodriguez is the protagonist in this sequel and he returns with a bang. The basis of the story is that after the events of the first game, your former CIA boss Tom Sheldon, has apparently gone rogue. Now being a top CIA agent and more importantly his protégé, you know his modus operandi (M.O. or Method of Operating) and as such, you are the best one to track him down. 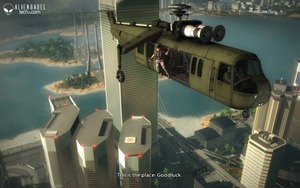 I will give no spoilers here about the story but I will move on to tell you more about the gameplay. The action can be considered endless but there are times when you will really need to take a breather. There are over 1,000 square kilometres in which to explore and cause chaos. Speaking of chaos, it is one of the game’s hallmarks. 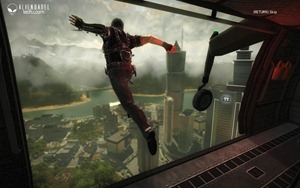 Let’s get to the gameplay and all the disorder it brings with it.