3D TV is Coming, There’s No Stopping It Now

The following is by G. A . “Andy” Marken, President of Marken Communications Inc. He has kindly given us permission to republish his thought-provoking article. As with everything that we publish at AlienBabelTech, the opinions expressed are solely those of the individual writer and do not necessarily reflect the views and the opinions of the rest of the ABT staff. –Mark Poppin, ABT Senior Editor 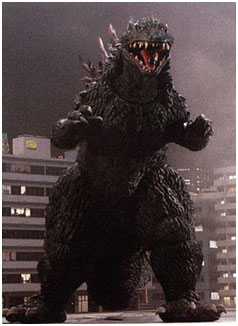 “… Politicians from around the world will see it. Of course, they’ll want to use it as a weapon. As a scientist – no, as a human being – I can’t allow that to happen!” – Dr. Seizawa, Godzilla (1954), Toho Films

After attending so many CES (Consumer Electronics Show) events, you’d think we’d resist being swept away by the buzz.

Sure, after last year’s show, all we saw was 3D.

“They” swore all the pieces were in place.  And we believed it.

We’re still as optimistic and enthusiastic about the long-term success of 3D TV as we were before;  but this time, we’re going to be a little cautious.

We’re taking the advice of that great U.S. President — George W. Bush — who stated so profoundly, “fool me once, shame on – shame on you. Fool me – you can’t get fooled again.”

Ah well…you get the idea.

The motion picture industry is really all over 3D.

Last year, Hollywood put out 25 3D movies.  This year, they expect to double that number.

And, according to NATO (National Association of Theater Owners), that number should quadruple by the end of 2011 to eliminate the strain on available 3D screens and scheduling. 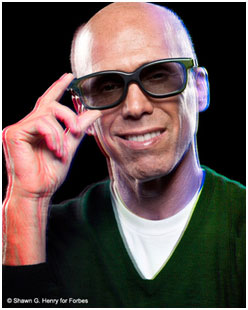 Lookin’ Good – Dreamworks CEO Jeffrey Katzenberg thinks glasses for viewing 3D movies are great.  He should, his video masterpieces have consistently brought in millions of viewers and hundreds of millions in ticket sales this past year.  With more screens available and 3D sets becoming more popular, the future looks rosy – with or without glasses.

No wonder Katzenberg loves his glasses so much!

But we were kinda’ expecting the stuff to be ready for the home by now.

We forgot the basic fundamentals of the content industry.  Penetration requires:

Yeah, we glossed over “a few things” last year.

This year, we put down the cup, stepped away from the bar and thought about what we saw.

Don’t give us that “Hey, you shoulda’ known better!” routine.

You’re right, and there were still a few things needed to be ironed out:

When the brother-in-law decided he needed to upgrade from his four-year-old HD projection screen, he looked at the new flat screen iNet connected TVs.

But he decided it was better to leap forward two improvements and get a premium 3D set (and two pair of glasses).

ESPN had the events he wanted in 3D.

Everyone is trying to figure out how/when they can do it and make money. 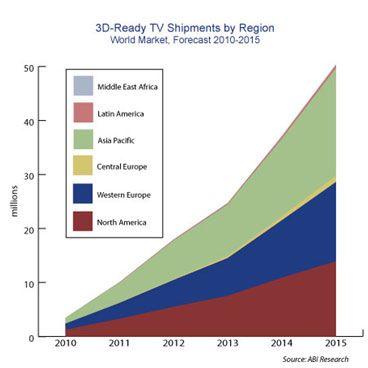 Good, Not Great – As with most “new” technologies, fortune tellers saw 3D TV set sales taking off like the proverbial hockey stick.  They overlooked the fact that we just invested in a new High Def screen and there was only a minimum volume of decent 3D content available to watch at home.  But over the next two years, the picture will change.  Source – ABI Research

We’re just not into watching disc movies over and over.

Golf and football won’t win us over.

There’s a new 3D Godzilla movie in the works and it will be available in…2014!

Not enough to convince you to go full 3D?

The new Avatar movie will be released then too and will be even more spectacular than Cameron’s original.

All of the 3D heavyweights were at CES to discuss the investments, improvements being made in every sector – production, post-production, programming, distribution and viewing.

A lot of the research being is being done to understand how the mind handles, processes images in our 3D world.

It’s similar to the work done in perfecting psychoacoustic sound.

Knowing there’s a single audio source and yet “feeling” the sound go in one ear, pass around your head to the other ear is mind-blowing.

The same is being perfected on how the mind processes, handles, responds to stereo images.

The great thing is, every standards organization is developing their set of standards:

A big buying chasm, of course, is the glasses.  Not that you have to wear glasses, but that folks offer you a choice:

Each technology has its champions and its detractors.

The problem is, people don’t go to movies, buy TV sets or rent new smart devices based on technology.

They make the decision based on the experience.

No consumer wants to choose the wrong “right” solution.

Fuji’s stereo camera is a good first-generation solution,  but it’s not just the camera.

Being the first, Fuji had to supply the total ecosystem – camera, processing, viewing frame.

It needs to be instant, universal like all of today’s digital photos.

Personal 3D Video – A number of decent image quality, economic 3D cameras and camcorders have been introduced that require no glasses for viewing…as long as you view the images/content on the unit’s viewer.  If you can get the content to your PC, 3D TV set, active or passive glasses will be required.  There are technology reasons for this, so for the foreseeable future…live with it!

There were some reasonably priced 3D camcorders introduced.  You didn’t even need glasses,  as long as you used your camcorder’s viewer or display.

Of course, it would be neat to play your 3D family movie on your 3DTV set.

Our kid wanted the 3D TV to play his games on; but heck, he’s already had real 3D platforms to burn.

He has his notebook…desktop…active shutter, passive polarized glasses…special gloves…more stuff than we ever dreamt of when we were his age.

And he’s not alone.  3D computers are moving very well because other options are “a little behind the curve.” 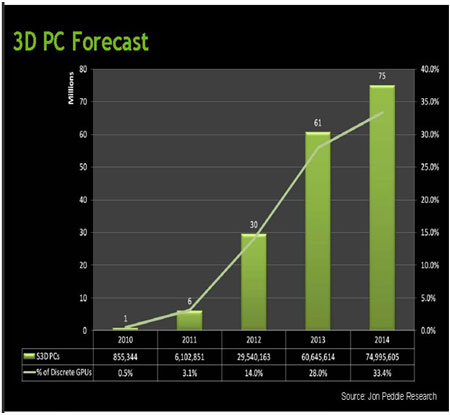 Game On – Most of the new single and multiplayer games are brilliantly executed in 3D with breathtaking action, photo-real play and everything the adrenalin junkie could ask for.  Source – Jon Peddie Research

Just as gamers lead the party in getting high def screens, more than 75 percent of the gaming systems fully support 3D.

Glasses don’t bother gamers when they play stuff like WOW (World of Warcraft) for hours on end.

Gamers are actually better off than the rest of us, because they already have more than 425 games to immerse themselves in and most are multiplayer.

It will take a couple of years for all the parties to figure out how each is going to make a buck…or two. 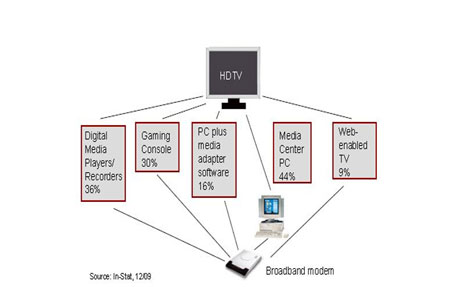 Cutting Up the Pie – Content producers, providers and delivery services are all working hard to deliver a complete array of 3D content to the home user.  The challenge is not technology but determining who gets paid how much for the materials you enjoy.  Source – InStat/DisplaySearch

But by 2014, everything will be in place/worked out and we’ll be able to sit spellbound watching Godzilla on our even bigger 3D screen.

Dr. Serizawa was right in holding back, “If my device can serve a good purpose, I would announce it to everyone in the world! But in its current form, it’s just a weapon of horrible destruction.”