This is not going to be the usual Solid-State Drive (SSD) review touting the theoretical advantages of the SSD over the mechanical Hard Drive (HDD).  This has been done over-and-over in many reviews and a particularly excellent evaluation was done by our own MrK on the earlier version of the same SSD that we are evaluating today – Kingston’s improved 128GB SSDNow V100 SSD.

The SSDNow V100 is a 100% Kingston-branded solid-state drive using the same JMicron 618 controller as the previous SSDNow V Series drive. The new V100 uses Toshiba’s new 32nm NAND, therefore it has received a firmware upgrade plus performance enhancements in order to be optimized for the 32nm die shrink.  However, instead of concentrating on the technical, we are going to be looking at the advantages that a PC gamer might have using a SSD over a fast mechanical hard drive. 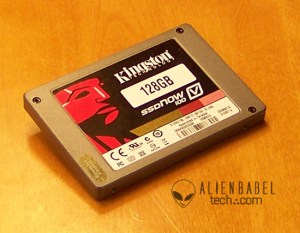 Of course, we shall briefly rerun some of Karan’s synthetic and real world testing to see if we can see the performance improvements that Kingston promised over the older version, last year.  To properly bring you this review, we purchased two Seagate 500GB 7200.12 HDDs from Buy.com for $40 each, shipped; $80 total costs for 1TB of total storage in two separate mechanical HDDs!  Compare this to our 128GB Kingston SSDNow v100 which retails for $234.99 and we would have to say, the SSD had better be much faster.

We have also noticed that pricing on SSDs have been dropping and currently this same SSD has been on sale at NewEgg this week for $194.99 and there is a further $75 mail in rebate which brings the price down to $119 which is finally below the $1-per-gigabyte storage costs that have long been considered breakthrough low-pricing.

Evaluating the Kingston SSD from a gamer’s perspective means finding the practical advantages of the SSD over the HDD, including more than three months of daily using it.  Because a Solid-State Drive’s performance tends to degrade over time, many reviews are carried out with the SSD in a completely brand new state each time every single benchmark test is run.  That means the SSD is erased after each test is run.  How fair is that?  We made sure to start out with all of our drives brand new, and then we used our drives in normal day-to-day usage and tested them against each other for the benchmarks that you will see.  Read on as we share our three-month journey into the practical advantages of the SSD over the HDD from a gamer’s perspective.

The SSDNow V100 is targeted as an upgrade path for mainstream consumers including gamers as a cost-effective performance upgrade option in upgrading a desktop or notebook. The older KingstonNow V-series 128GB SSD that MrK reviewed last year had a good price to performance ratio. With an updated controller and 32nm NAND, read and write performance has markedly increased from the previous-generation Kingston SSDNow V Series SSD.  The older drive was capable of up to 200MB/sec. read; 160MB/sec. write whereas the new one can manage up to 250MB/sec. read; 230MB/sec. write; a solid improvement for the same list price

Kingston has also introduced a 256GB capacity SSD with the SSDNow V100, giving consumers a higher-capacity option at a good price point.  There are two kits available.  The SSDNow V100 is available with the bundle upgrade kit which includes cloning software along with a 2.5″ hard drive enclosure (notebook bundle only); or 3.5″ brackets and SATA and power cables (desktop bundle only).  We are evaluating the desktop bundle in this review.

A firmware upgrade with the older SSDNow V Series such as our MrK evaluated last year, is not possible due to a process shrink.  MrK’s older V Series uses 43nm NAND and our new V100 SSDNow uses 32nm NAND Flash. Any attempt to upgrade the firmware of the older drive with the new would probably end in disaster and a useless drive.  However, the older drive is very fast and it also supports TRIM and garbage collection found in the newer series which will keep your SSD running near its optimal performance over its long lifetime.

Pictured below is the Kingston SSDNow V100 (front center) with four mechanical drives – two 250 GB 7200 RPM drives of Seagate’s tenth generation and two brand new 500 GB drives of their latest, the 12th generation.  Notice how much thinner the newer drive’s cases (left) are compared with the drives (right)  from two years ago.  The new Seagate Barracuda HDDs are quieter and faster than their mechanical hard drives of just two years ago although the rotation speed remains at 7200 rpm.  Mechanical HDDs have become much cheaper and a 1TB drive may now be purchased for about the same costs as a 250GB drive just two years ago!  How does a Solid-State Drive stack up in terms of price/performance to these mechanical drives in a practical way for gamers?  The answer is forthcoming! 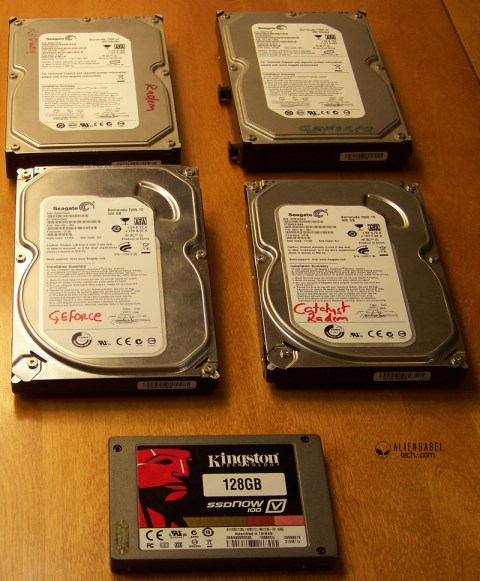 Here are the specifications from Kingston’s own web site that covers the entire Kingston SSDNow V100 series.

* Some of the listed capacity on a Flash storage device is used for formatting and other functions and thus is not available for data storage. As such, the actual available capacity for data storage is less than what is listed on the products. For more information, go to Kingston’s Flash Memory Guide at kingston.com/flash_memory_guide.

**Speed may vary due to host and device configuration.

Differences between Notebook and Desktop bundle

Since Kingston sent ABT the desktop SSD kit, we are evaluating it from the standpoint of loading Windows 7 onto it plus applications, and benchmarking it versus the hard drive with the identical setup.  Now Kingston includes the brackets and SATA and power cables for the end user along with the cloning software so we also have the option of making the SSD the C drive and putting the bulk of the data on a mechanical storage drive.  In this scenario, the SSD becomes a boot drive for the PC and it is an option that can work well.

Setting up a SSD and a HDD together is beyond the scope of this article, but you will be able to access anything on the SSD lightning-fast to take advantage of your favorite applications and games and still use the mechanical drive seamlessly, just as it would be without the SSD as boot drive.  Not all SSDs have great read and write times, so not every program will benefit from being on a SSD, but all will benefit from the lightning-fast response from the seek times that a SSD enjoys over the HDD.

The difference with the notebook upgrade is that if had we gone down that route, Kingston would have sent us the notebook bundle.  What we would have got instead is a 2.5″ enclosure, the SSDNow V100 and cloning software.  In that case, we would have installed the SSD into my notebook, plugged the old 5400 rpm HDD into the enclosure, popped in the disc and cloned the HDD onto the SSD.  When finished, the old notebook HDD now becomes an external hard drive to give more storage.  Or one can remove the notebook’s optical drive and use the SSD together with the old HDD.