[ABT Exclusive] HTC Glacier is back with GPU performance results

First let’s take a look at the results of the GPU on the HTC Glacier:

Now why we believe that this phone uses the QSD8672 chipset ?

The GPU score on the HTC Glacier is about 87% of the score of the Samsung Galaxy S using the PowerVR SGX 540 GPU. Samsung has stated that the Hummingbird processor is capable of processing up to 90 million triangles per second (MTPS). For confirmation on that watch this Samsung Galaxy S keynote video around the 3:45 mark. Now here’s an interesting fact: Qualcomm states that the QSD8672 can process up to 80 million triangles per second. So what’s 80 MTPS divided by 90 MTPS ? The answer is around 88% which is almost the same percentage of performance from the above result. 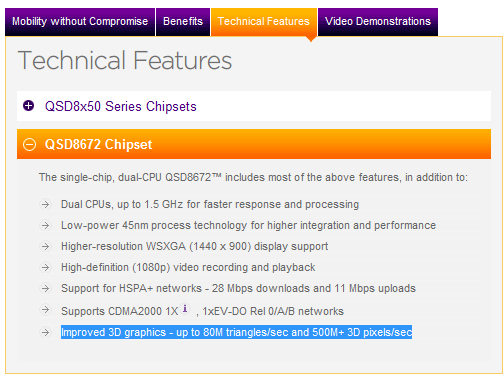 Here are the CPU benchmarks from the previous article again: