This article is part two of my Radeon 5770 investigation. Part one covered performance, while a future installment will cover image quality in depth. This article also serves as another installment in my ongoing bottlenecking series, and I’ve already tested a GTX285, GTX260+ and a 8800 Ultra in a similar manner.

Today I’ll attempt to answer the burning question of whether the 5770 is primarily limited by its memory bandwidth or not. The question has been asked and hypothesized repeatedly, but I haven’t yet seen a comprehensive attempt to answer it.

While ATi’s hardware doesn’t allow separate shader and core clocks like nVidia’s does, we can still isolate the memory from the core by changing one of the clocks, but leaving the other at stock. Since there’s no real limit as to how far each can be underclocked, I’ve chosen a nice round figure of 20%. I’ll underclock the core and memory individually by 20% while leaving the other at stock, and see which has the greatest impact on performance.

In the past I’ve found the selection of titles and settings can influence the overall result to some degree, so this time I’ve picked a larger selection of games at varying settings to get a more accurate picture. I’ve also run all tests with at least 2xAA since it’s reasonable to expect someone gaming on a 5770 will use at least this setting. Also since AA hits the memory bandwidth harder, there’s a greater chance of stressing it more if it’s indeed the primary limiting factor.

The stock results have been generated by my 5770 performance review, and the system and benchmark setup in this article is identical to those tests. Essentially this review takes certain results from that review and compares to them to newly generated results from underclocking the 5770. 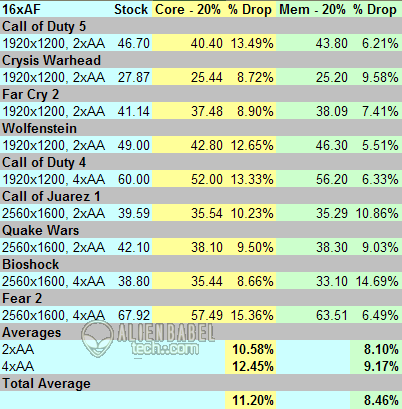 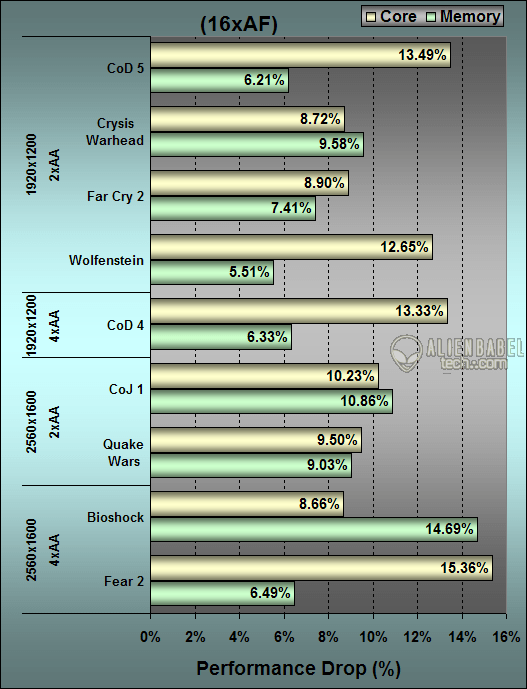 Well isn’t this interesting? The 5770 is primarily limited by its core overall, not by its memory!

Underclocking the core 20% results in a 11.20% performance loss overall, while doing the same to the memory results in a smaller 8.46% performance hit. This makes the 5770 a reasonably balanced card, with a small bias towards its core. This is unlike 8800 Ultra for example, which showed a massive reliance on its core across the board.

The results actually make sense given a 5770 is basically a 5870 chopped in half, and the 5870 was proven to be primarily limited by its core too. If you shrink the processing power and bandwidth in proportion to each other like the 5770 does (i.e. cutting both in half from the 5870), you’ll end up with very similar performance characteristics.

Also the performance hit increases when moving from 2xAA and 4xAA with the core (10.58% to 12.45%). We expect this to happen with the memory (and it does) but since the core is also affected, that tells us the ROPs are also bottlenecking the equation to some degree.

As for the individual games, we see Call of Duty 5, Wolfenstein, Call of Duty 4 and Fear 2 being massively more limited by the core than the memory, while the opposite applies solely to Bioshock. The rest of the games are affected reasonably equally by both clocks.

The results generated today seem to disprove the commonly accepted idea that the 5770 is primarily held back by memory bandwidth. In actual fact ATi seems to have equipped the card with enough bandwidth to make it a reasonably balanced part overall.

Also based on the results generated today, if you’re trying to get more performance from your 5770, you should clock the core as high possible.