The main improvement ATi has brought to the table is angle invariance. This essentially means that all surfaces are filtered with equal strength, regardless of their angle relative to the camera. This improvement could be partly possible due to the removal of the fixed function interpolators that bottlenecked performance and lacked precision, and by moving some of the calculations onto the shaders. Aside from this enhancement, I’m also keen to see if any improvement has been made to surface filtering strength, which is the main area where ATi was visibly weaker than nVidia in the past.

First, here’s AF applied to a theoretical rendering of a tightly textured black and white pattern. These pictures were taken with 16xAF and 8xMSAA (click them to see larger versions). 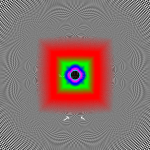 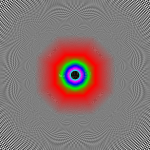 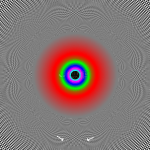 We’ll start by paying attention to the colored areas that begin with the red section and move into your screen. This area represents mip-mapping, which is smaller textures derived from the base texture.

With the 4850 we see the red and green areas are square, while the other colors are clover shaped. This is actually the worst implementation of the three cards, but it was better than current implementations at the time it debuted on ATi’s X1xxx series.

With the GTX285, we immediately spot the huge improvement over the 4850. The red section is the worst but given it’s octagonal in shape, it’s still much better than the 4850’s box. While the rest of the colors still have a slight flower shape, they’re far closer to being circles than the same 4850 colors are.

Next we’ll check filtering strength, and we can do this by ignoring the colored areas and instead focusing on the black/white/gray areas in front of them. The star shaped patterns are texture aliasing caused by undersampling. This texture aliasing is responsible for flickering and shimmering on textured surfaces during gaming.

With the 4850, we can see more stars appear as we move towards the center, and as we touch the red section, we see multiple adjacent stars. I’ve marked two of them with white arrows.

The GTX285 also has the same issue, but as we move further back and touch the red section, the 285’s stars are far less pronounced than the 4850’s. If this were a moving scene, these sections would shimmer less on the GTX285 because the texture filtering is stronger than the 4850.

Moving on to the 5770, we see something bizarre happen. It introduces sharp gray transitions of varying texture detail, eventually culminating into what can be called a “dead-zone” – the solid gray ring touching the outer red section with no discernable texture pattern applied to it. Furthermore, the largest gray ring introduces new stars that the other two cards don’t have (two such instances are marked with white arrows).

While there are no stars in the “dead-zone” – and hence that area should shimmer less compared to the other cards – there’s also no obvious texture pattern applied to it either, so this solution isn’t correct. In actual gaming, I’d expect this area to be blurrier than the other cards in comparison.

Based on these results, 5770’s angle invariance is outstanding, but its surface filtering is unacceptably poor and is worse than the other two cards. I can only hope it’s a driver bug that can be fixed.

Incidentally, here’s the same scene with 8xSS on the 5770: 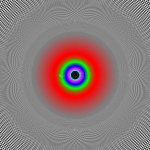 With 8xSS, the surfaces in the gray rings look absolutely superb, and all star patterns are almost invisible. Sadly the sharp transitions are still present however.