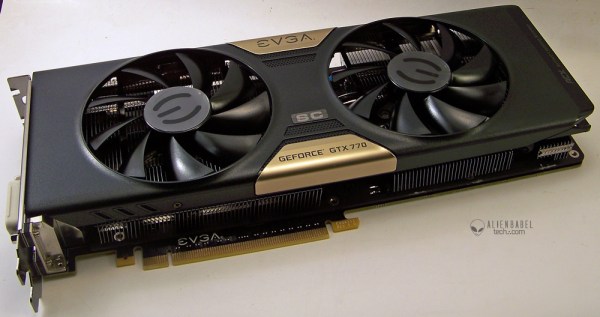 At the end of May, Nvidia released the GTX 770 as a direct challenge to the HD 7970 GHz edition. At the $400 pricepoint, it is replacing the GTX 680.  The GTX 770 uses the same GK104 GPU as the GTX 680 with a few new additions that enable higher performance.  The new additions to 700 series include the Titan’s and the GTX 780’s Boost 2.0 controls and a little more board power which enables higher clocks.  The GTX 770 uses 7GHz GDDR5 memory as an upgrade over the GTX 680’s 6GHz memory because the 256-bit bus is narrow for such a highly-clocked GPU.  Below is pictured the reference GTX 770 which uses an advanced blower-style cooling fan that is also shared by the Titan and the GTX 780. 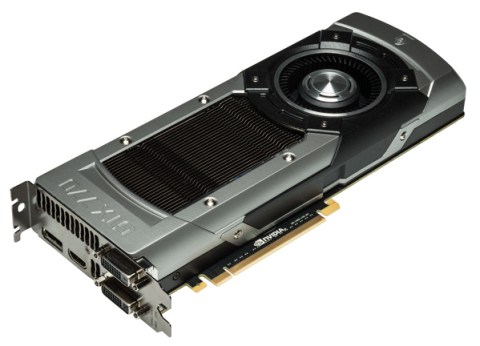 We are going to focus on the EVGA GTX 770 SC’s performance and especially on overclocking it beyond its base clocks (1111/7010MHz) which will go beyond the highest user Boost overclock to 1215MHz by nearly 100MHz (to over 1300MHz) that we got from our reference GTX 770 (1046MHz plus 90MHz core overclock).

There are going to be many varieties of the GTX 770 with their suggested base price starting at $399 which also include some factory overclocked SKUs. Here are three comparisons of EVGA GTX 770 pricing:

This particular evaluation is not designed to compare 4GB vRAM versus 2GB.  Performance differences are rarely seen even at 2560×1600, but rather at widescreen resolutions using 3 panels such as at 5760×1080.   Our comparison of 2GB versus 4GB vRAM will be published later on this month, after we evaluate GTX 770 SLI and Tri-SLI.

For this evaluation, we will compare the performance of the EVGA GTX 770 SC with its main competitor, the AMD Radeon HD 7970 GHz Edition. The HD 7970 GHz edition can be purchased for as little as $375, or for overclocked versions to nearly $500 without any current game bundle.  A coupon for a free digital download of Splinter Cell Blacklist is included with the EVGA GTX 770 SC. We will also see if we can overclock our EVGA GTX 770 SC further to narrow the performance gap with the much more expensive GTX 780 ($650).

Since we do not want any chance of our CPU “bottlenecking” our graphics, we are testing all of our graphics cards by using our Ivy Bridge Intel Core i7-3770K at 4.50GHz, 16 GB Kingston “Beast” HyperX DDR3 at 2133MHz, and an EVGA Z77 FTW motherboard. This EVGA FTW motherboard features 16x + 16x PCIe 3.0 specification for CrossFire/SLI which we will test in the next article covering the GTX 700 series.

The Core i7-3770K at 4.5GHz is more than enough to differentiate even high-end video cards at high resolution and at high detail settings.

Before we look at our test bed and run benchmarks, let’s unbox our EVGA GTX 770 Superclocked edition and look at its specifications.