Last September, Nvidia introduced the first Sniper, the GeForce GTS 450. To describe the capabilities of the GTS 450 when talking with gamers, Nvidia drew an analogy between a Sniper class unit from an RTS/RPG game.  The Tank refers particularly to Nvidia’s flagship video cards (GTX 570/580/590) which are equipped to handle any gaming situation at high resolution and with maximum details and with maximum filtering and anti-aliasing applied. The Hunter (GTX 560 Ti) is equipped especially for 1920×1200 gaming. And now we re-introduce the new refined, Sniper – rebuilt in the same way as the Tank and the Hunter – as the EVGA GTX 550 Ti and especially suited for 1680×1050 gaming.

Just over two weeks ago, Nvidia introduced a new GeForce Sniper for gamers that’s even more powerful, the GeForce GTX 560 Ti! Yes, Ti stands for Titanium and it brings back fond memories of the old GeForce Ti series which offered excellent bang for buck back then. We also note that the “S” designation in the GTS 450 has been replaced by an “X” as in GTX 550 Ti; the Sniper joins the Hunter and the Tank all as GTXes – gaming GPUs primarily.   Here is EVGA’s new overclocked GTX 560 Ti which etails for the suggested price of $149.99 but can be found now a couple of weeks after launch for $129 after rebate in the United States (with Mafia 2 !!). 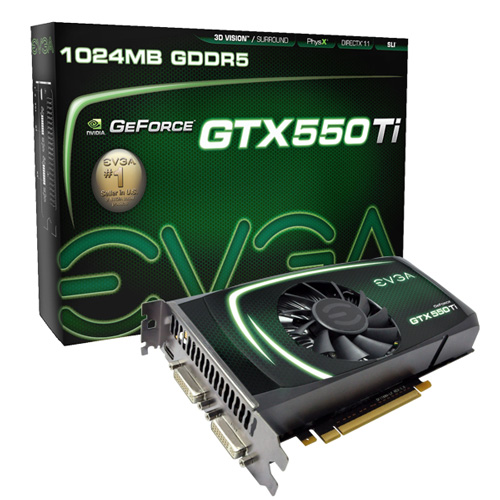 This is EVGA’s recently launched newly reconfigured “Sniper”, the new GTX 550 Ti.  It is the new GPU with much higher performance than the GTS 450 but it is clearly not set to replace the GTX 460 which will continue to be made and sold. This new Sniper has a suggested etail price of $150 which is in-line with the GTS 450 pricing at its launch and it is also built for 1680×1050 gaming. Ti is going to take direct aim at especially the HD 5770 as well as the HD 6850 which are etail-priced around $129 and $149 respectively; especially after mail-in-rebates for the HD 6850.

In our original review of the GTS 450 last September, we saw it go toe-to-toe with the HD 5750 although its performance fell short of the HD 5770’s.  Nvidia filled their product line-up’s “hole” with discounted versions of the GTx 460 and especially the 768MB version although it is a more expensive card to produce than the GTS 450.  Nvidia’s strategy worked and the discounted GTX 460s put pressure on AMD and gained some marketshare at a cost.  So Nvidia’s logical choice is to bring in a cheaper to produce GTS 450 replacement that can meet or beat the HD 5770 in the same approximate $150 ($129-$169) range.

And now we are looking forward to the nearly 30 percent improvement with the new GTX 560 Ti that Nvidia promises over the original Sniper, the GTS 450 – all for the same price as when the 450 originally launched!  Logically we will compare it to the HD 5770 which is its main target. 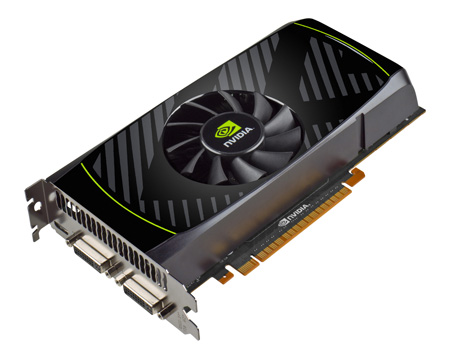 The reference version of the GTX 550 Ti is shown above and its core is clocked at 901MHz. For the same suggested etail price of $150, we see the EVGA GTX 550 Ti is overclocked to 951MHz – free performance for the same price as the reference version!  Of course we shall test the EVGA clocks versus the reference clocks and versus the ultimate clocks we can achieve with the stock fan profile and voltage to see how performance in games scales with increasing clock speed. 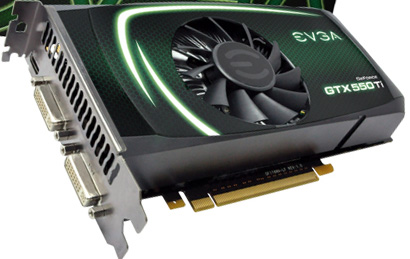 Nvidia released its long awaited GeForce GTX based on its brand new Fermi DX11 GF100 architecture back in April of last year, six months later than AMD’s own DX11 Cypress video cards. This new Fermi GPU – Graphics Processing Unit – a term originally originated by Nvidia is a continuation of their strategy since their G80 which launched over three year ago to create a General Purpose Processor – co-equal with the CPU – that also renders amazing graphics. The culmination of Nvidia’s efforts with their GF100 DX11 Fermi architecture was the GTX 480 with the caveat that it runs rather hot and the cooling solutions based on the reference design are rather noisy.

Things changed very rapidly as Nvidia’s introduced a new refined GTX 400 series ‘Tank’, the Galaxy GTX 480 SuperOverclock on a mature process which we covered in this review. Shortly thereafter, enter the completely redesigned Nvidia Tank – at $499 suggested etail pricing and designed to be faster and more efficient than even the super-overclocked GTX 480s.

The GeForce GTX 550 Ti was designed from the ground up to deliver exceptional tessellation performance, which is a key component of Microsoft’s DirectX 11 development platform for PC games. Tessellation allows game developers to take advantage of the GeForce GTX 550 GPU’s tessellation ability to increase the geometric complexity of models and characters to deliver far more realistic and visually rich gaming environments.

You will soon see that although the clocks of Nvidia’s GTX 550 Ti are clocked higher than the reference GTS 450 version, Nvidia kept their headroom for the new GPU! Because of that, EVGA was able to go much further than the reference core clock that Nvidia set for the GTX 550 Ti, while still remaining cool and quiet. Here is the specification chart for the GTX 550 Ti at a glance. Right away we notice the GTS 450’s clock is way up and now the new GPU supports the new HDMI 1.4a connector standard. 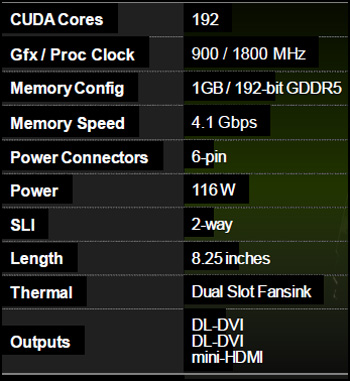 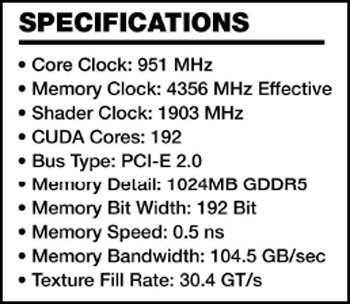 Needless to say, the new Fermi GF116 GTX 550 Ti brings a lot of features to the table that current Nvidia customers will appreciate, including improved CUDA’s PhysX,  Surround to drive up to 3 LCDs with GTX SLI, 3D Vision, superb tessellation capabilities and a really fast GPU in comparison to their GT200 series and even their hot running GF100 series variants like GTX 465 and GTX 470 .

The GTX 550 Ti has improved performance on a clock-per-clock basis that increase efficiency in many cases over the GTS 450. Besides that, Nvidia has increased the clock frequencies and the SMs are all operating more efficiently. We can expect that the GTX 550 Ti will be about 28% faster than the GTS 450 which launched for the same $150.

We also see the GTX 550 TI launch with 1GB of vRAM instead of the expected 768MB due to being engineered to use mixed density GDDR5 memory for the first time.  This is actually a big deal although 1GB of vRAM is not likely to be really useful over 768MB in this class of card.  Perhaps it would be more useful when the GTX 550 Ti is in SLI with a second one and they are dealing with a higher resolution than 1680×1050 – the resolution for which this card was designed. 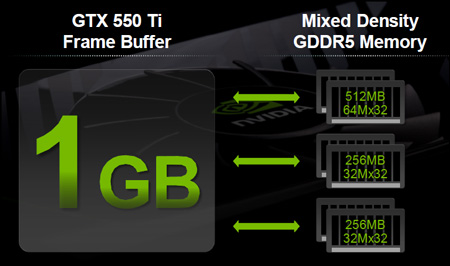 Beauty is more than skin deep

The GTS 450 was completely re-engineered at the transistor level into the GF116 GTX 550 Ti. Through a complete Fermi redesign on a mature process on TSMC’s 40 nm, the GTX 550 GPU achieves higher clockspeed than the GTS 450 with significantly more performance per watt and with fewer transistors. Only one 6-pin PCIe connector which may be supplied by molex adapters is required. 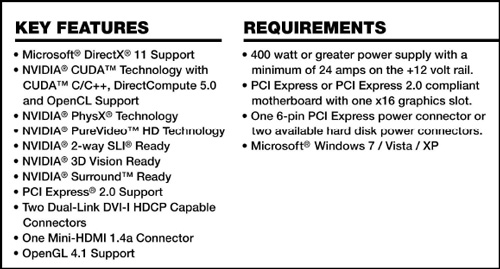 SLI is supported by GTX 550 Ti and there is improved scaling. There are also recently more compelling reasons besides increased performance to consider GTX 550 Ti SLI which includes being able to experience Nvidia’s multi-display 2D/3D Surround. It is an advantage to keep open the options of adding a second GTX 550 later on.  GTX 550 Ti is primarily designed to handle the most popular widescreen resolution of 1680×1050.  Later on the end user may choose to add a second inexpensive GTX 550 Ti in the future if he upgrades his display to 1920×1080, or games become more demanding.

Nvidia has added a power draw limitation system to their card beginning with the GTX 580 and also with the GTX 570 and GTX 560 Ti. When either Furmark or OCCT are detected, sensors measure the incoming current and voltage to calculate the total power draw. If the power draw exceeds a certain predetermined limit, the GTX 550 Ti will automatically downclock to avoid damage to hardware components. After the power draw drops back to safe limits, the GPU returns to normal clocks much the same as with thermal management. 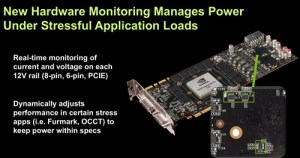 Because of this, we will no longer use Furmark for showing power draw and will return to using games to illustrate real world situations. Currently, this power management only switches on when Furmark or OCCT are detected and it should not limit overclocking unless Nvidia extends this management to regular PC games. Evidently this works by having the GeForce driver detect the program and treat it as a virus. In the case of the GTX 580 and the GTX 570, this power limiting circuitry implementation is mandatory by Nvidia’s parners. Like the case of the GTX 560 Ti, Nvidia allowed their partners to choose to include it – or not – with the GTX 550 Ti.

The EVGA GTX 560 Ti come in a no-frills box which means there is little packing to recycle or toss.  Besides your new GTX 550 Ti, you get the driver CD, the user and quick-start guides, a VGA to DVI adapter and a PCIe to molex adapter (not shown) plus a EVGA sticker. 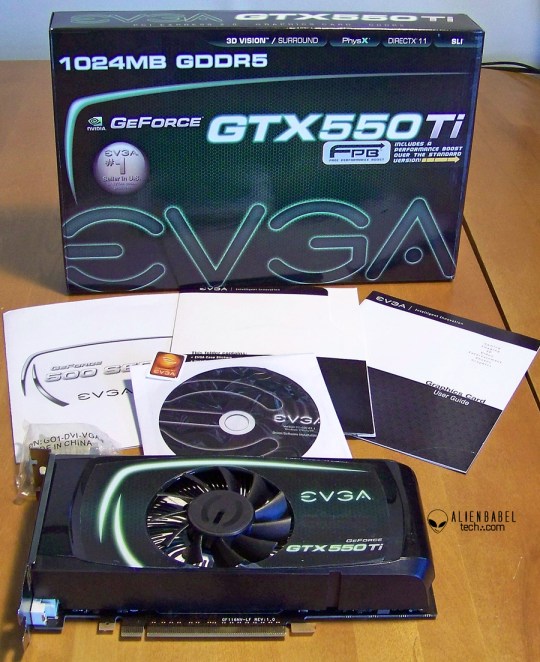 Of course EVGA also sells their video cards at retail and there is plenty of information right on the box. 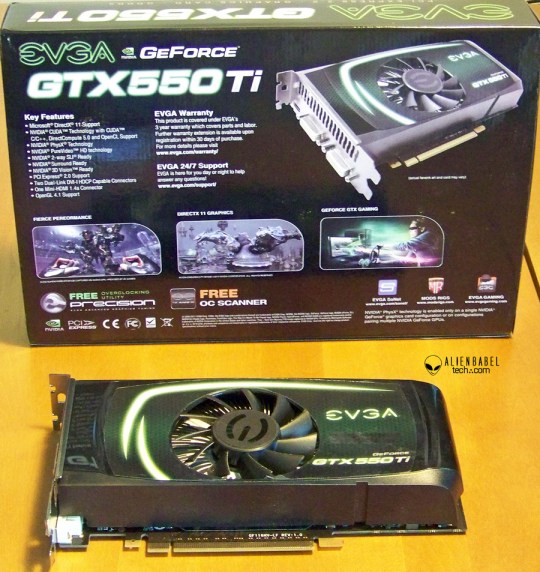 Let’s look at what EVGA offers us over the reference and other partner versions with their GTX 550-Ti:

· Free version of 3DMark 11 Advanced Edition included. Users can redeem their code when the product is registered on EVGA.com. This is a $19.99 value. For more information, please visit http://www.evga.com/articles/00594/

· Special Edition EVGA Precision – EVGA created a special look of their software specifically for the EVGA GTX 550 Ti. This utility allows overclocking, monitoring and fanspeed adjustments. It is located on the DVD that ships with the card. For more information, please visit www.evga.com/precision/

· EVGA Advanced RMA Program – EVGA offers this service to help reduce the downtime of a customer’s system by shipping a replacement product first and lets our valued customer deal with the EVGA directly for quick and efficient service. For more information, please visit www.evga.com/ear/

The EVGA GTX 550 Ti is factory overclocked with a Dual BIOS which can be a card-saver if a flash goes bad. EVGA included their Precision overclocking software on the driver DVD or as a download on their site; you can even raise the voltage. This is a tool that we have often used with great results. With a great warranty and advanced RMA’s optional, EVGA offers great service!

The EVGA warranty is superb. Notice that you have 3 years that can be extended by registering, 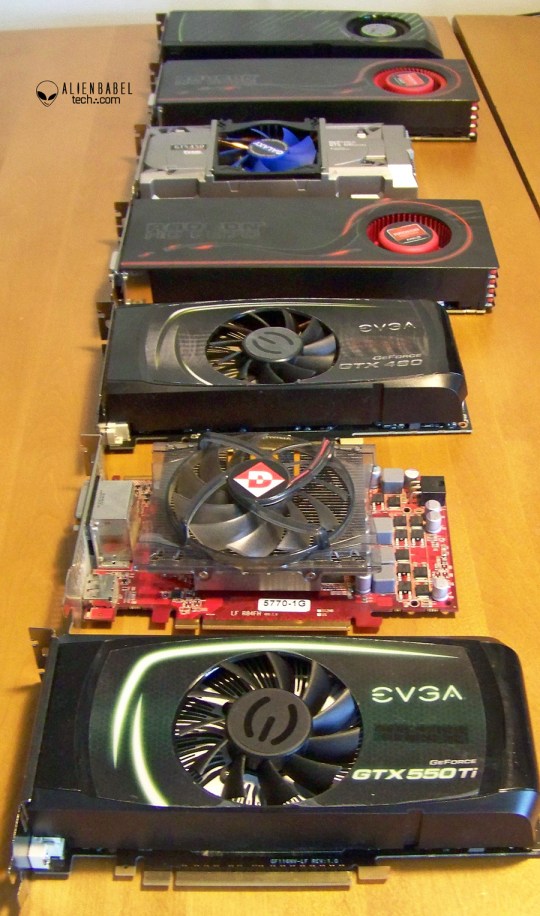 Everything looks great and we will head for benching our EVGA GTX 550 Ti.  Before we do, check the next page and the test configuration.