We received a Z77 FTW motherboard from EVGA and have been comparing its performance for a month to our ECS Z77H2-A2X motherboard after we benchmarked Bloomfield versus Ivy Bridge.  Now we want to see if we can push our Core i7-3770K to its maximum clockspeed under high-end air or water cooling, and determine if the EVGA FTW motherboard can make a difference.   The EVGA Z77 FTW is geared toward the overclocker and it is almost unique as one of very few Socket 1155 motherboards that supports 4-way SLI plus PhysX. 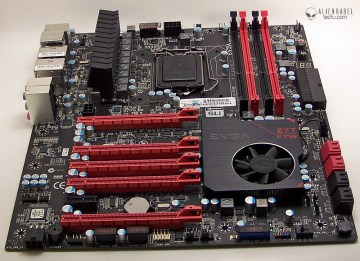 Using the Ivy Bridge platform, we saw good performance improvement in gaming by overclocking our DDR3 but found no performance difference between having 4GB or 8GB of system memory. With the ECS motherboard, we noted that adding two more sticks of RAM – from 2x2GB to 2x4GB – destabilized our CPU overclock somewhat and it needed more voltage to compensate.

The EVGA Z77 FTW motherboard is built for enthusiasts and it retails for $330, but it can be purchased for $309.99 at Newegg at time of writing, and it’s about $90 more than the ECS Golden Series motherboard that we reviewed last month.  Naturally we will compare their performance.

The ECS MB comes with wireless LAN and Bluetooth and can support 2-way SLI while the FTW motherboard eschews all frills and offers a single mini-DP display, but supports 4-way Quad-SLI with 4 videocards where the cards are supplied by a PLX chip allowing for much more PCIe bandwidth to the individual cards than the ECS motherboard can provide.  We already saw that a single GTX 690 requires more bandwidth than PCI3 3.0 8x can provide.  And the FTW motherboard features two CPU power connectors (for a total of 300W!) and two PCIe power connectors to plug right into the motherboard to assure overclocking stability that most motherboards lack. 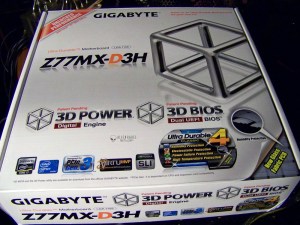 Unfortunately, the mATX motherboard did not allow our GTX 690 to properly seat itself in the PCIe slots over the SATA ports, and CrossFire and SLI was really hard to fit on such a small board. However, we noted that performance was nearly identical in the benchmarks that we compared at the same settings with the ECS Z77H2-A2X motherboard. 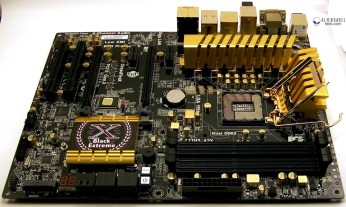 In the meantime, we completely upgraded our platform from using Seagate 7200 rpm hard disk drives to two Kingston 240GB Hyper-X SSDs as well as upgrading from 4GB to 8GB Kingston HyperX DDR3 PC1866. 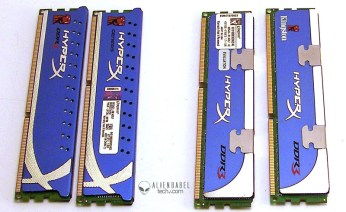 Kingston sent us two slightly different 240GB HyperX SSDs – one is designated “3K“(below left) for the number of program/erase cycles that the NAND inside the SSD is rated for, and it is less expensive than the “regular” HyperX SSD (below right) which is rated for 5K cycles.  Both the ECS and the EVGA Z77 motherboards were tested using the same HyperX (5K) drive (right).  We still run our game benchmarks from our Seagate 500GB HDDs as HDD gaming performance is identical to SSD gaming performance and we need the higher capacity of our HDD to store all of our games.

One improved feature of Intel’s new Core i7 CPU is that Intel’s latest DX11 HD 4000 graphics are integrated directly into the CPU. The Sandy Bridge processors use DX10 Intel HD 3000 Graphics with twelve execution units (EUs) whereas HD 4000 graphics is now DX11 and it has 16 EUs operating at 1150MHz in the Core i7-3770K.

CPU graphics is a convenience for many Intel users who no longer have to buy discrete graphics cards to run the latest DX11 games or to run three displays.  However, buying a discrete video card is rarely an issue for PC gamers as integrated graphics (IG) performance is never sufficient for them. Since most enthusiasts using this Z77 FTW motherboard are unlikely to use HD Graphics at all, we shall not test it.  Performance should be identical or within benchmarking margin of error between all three Z77 motherboards supporting CPU graphics that we have evaluated so far.

Please note that to use the EVGA Z77 FTW’s mini-DisplayPort out, you will need a native DisplayPort display or else use an active DisplayPort to DVI (or HDMI) adapter which costs close to $100.  Our passive mini-DP to DVI adapter did not work.  The is a negative for the FTW motherboard as even a HDMI out connector would have probably been more practical for more users if there isn’t enough room for a DVI connector, and comparatively few displays have DisplayPort. 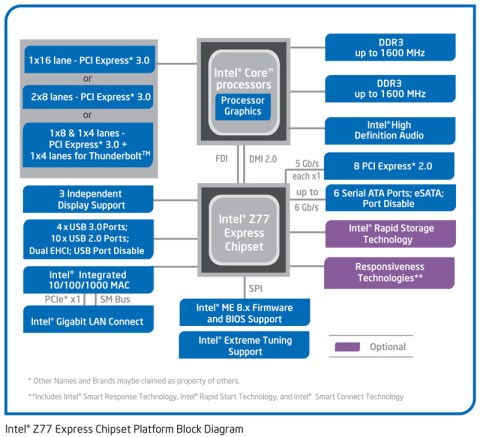 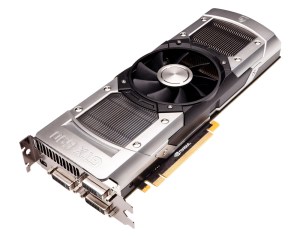 At time of writing, the GTX 690 (above) is the fastest video card and the GTX 680 (below) is the most powerful stock single-GPU available as it trades blows with the GHz edition of the HD 7970.  In fact, the GTX 690 has almost the same performance as two GTX 680s in SLI and it uses more bandwidth than PCIe 3.0 8x can provide! 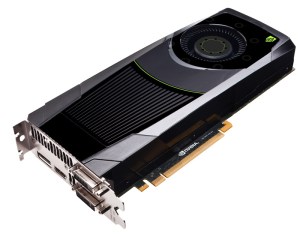 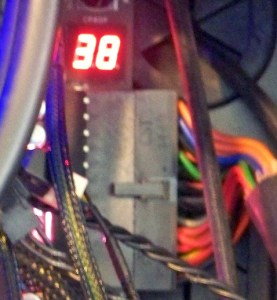 Probably the main advantage offered by Ivy Bridge’s Core i7-3770K is its incredible power savings features on the 22nm process. Ivy Bridge is a refinement of Sandy Bridge and a node shrink that should give us some performance improvement over last generation along with a lot of power savings and new features.  One amazing thing that we noted on the EVGA FTW motherboard, although we were able to max out our overclock for our cooling, we still retained all the power saving features for our Core i7-3770K when it was at idle.

The Z77 Chipset and the EVGA Z77 FTW motherboard

The Z77 FTW is EVGA’s premium enthusiast motherboard that take full advantage of Intel’s Z77 chipset for maximum stability and overclocking with features as noted on EVGA’ site.  It goes way above and beyond the usual motherboard to provide the enthusiast with the ability to  connect fourteen SATA devices at once!  And it is nearly unique in providing up to 4-way SLI plus PhysX or CrossFireX.

Here are the EVGA Z77 FTW specifications from EVGA’s site:

As one can see, the FTW is fully-featured. Head over to the next page and we’ll find more out about the new Ivy Bridge Core i7-3770K as we unbox our EVGA Z77 FTW motherboard.