Evolution is the nature of nature. Everything evolves. Man continues to work to make everything that he has better. Every product gets replaced by a more efficient and more feature-rich product. Such is the nature of things. Naturally, this applies to the world of technology where this evolution is very fast. Almost every year a technological product gets replaced by a newer, faster model. The graphics card industry is no stranger to this evolution. And the two big players here, Nvidia and ATI, are always looking to outdo each other with faster and faster graphic cards. As they say, “competition drives innovation”.

The GTS 250 is a perfect example of evolution. The G92 GPU chip used in this card, has a long history. Such is the history of this chip, that it would not be wrong to give this chip a legendary status and just call it “The G92”. This chip may be forever remembered in video card history for showing the world that a “mainstream video card” need not be a slouch capable of playing the games only at lower resolutions and lower settings when compared to their $600 top of the line brethren. For more on the G92 history check this out. The G92 based on 65nm fabrication process made its first appearance in the 8800 GT, with a handicap. The handicap was that the G92 chip implemented in the 8800 GT had only 112 shaders enabled. The G92 would make its full featured appearance in a video card called the 8800 GTS. The name was old, same as the G80 GPU chip based 8800 GTS,  but the underlying structure was different. G92-based 8800 GTS has 128 Shader Processors; uses a 256-bit wide memory interface paired with 512 MB, 1GB or 2 GB video memory. The G80-based 8800 GTS had 96 Shader Processors and used a 320-bit wide memory interface paired with usually 320 MB or 640 MB video memory.

The G92 chip would show up again in a video card named the 9800 GTX.  The 9800 GTX was basically the same card as the G92-based 8800 GTS with a few tweaks. These tweaks would not be in the GPU chip but rather in the PCB and other parts of the video card. These tweaks allowed the 9800 GTX to run at higher stock frequencies and required two 6-pin power connectors. The G92 chip made another appearance in the 9800 GTX+. This time it was based on a  55nm fabrication process and was codenamed G92b. The change in the fabrication process allowed the G92b GPU to be clocked higher than the 65nm G92 GPU. Other features such as shader processors and memory configuration remained the same. This card still required 2 six-pin power connectors. This was not the last time we would see the G92 GPU. The card I am reviewing today, GTS 250, is based on the same G92b 55nm GPU used in the 9800 GTX+. The GTS 250 has brought with it a shorter PCB and uses just one 6-pin power connector.

If you ignore the subtle changes that Nvidia has made to these cards, you might just call it rebranding, and that seems to be the general consensus among the enthusiast community.

The G92 chip has spanned three generation of Nvidia’s GeForce lineup of video cards, a feat unmatched by any other GPU chip in the history of video cards. This is why I said that this chip is legendary and we will call it “The G92”.

Let’s take a look at what I am reviewing today: 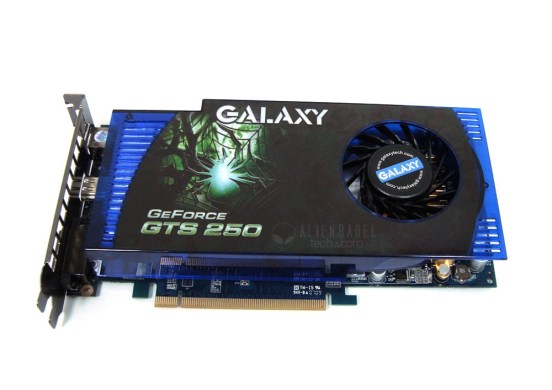 Galaxy, established in 1994, is a Nvidia Add-in-Board (AIB) partner which manufactures products from the low-end GeForce 7200 series to the high-end GTX200 series. They manufacture products based on Nvidia’s reference design as well as using their own in-house production facilities to manufacture graphic cards based on their own designs using high-end coolers from Arctic Cooling and others.

Galaxy has shipped to the US for a long time as they built video cards for many of the tier 1 brands in the market today. They realized they could create a brand for themselves and save the end customer the middleman fees.  Two years ago they launched Galaxy in the US and their products are now available at Best Buy, Microcenter, Fry’s, Dell.com, Newegg, TigerDirect and many other sites.  They have excellent quality and toll-free tech support with a 2 year transferable no-registration warranty.