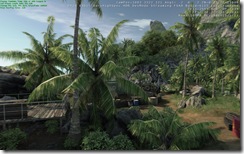 Next we move on to Crysis, a science fiction first person shooter by Crytek. It remains one of the most demanding games for any PC and it is also still one of the most beautiful games released to date. Crysis is based in a fictional near-future where an alien spacecraft is discovered buried on an island near the coast of Korea. The single-player campaign has you assume the role of USA Delta Force, ‘Nomad’ who is armed with futuristic weapons and equipment.

Crysis uses DirectX10 for graphics rendering. A standalone but related game, Crysis Warhead was released last year. CryEngine2 is the game engine used to power Crysis and Warhead and it is an extended version of the CryEngine that also powers FarCry. As well as supporting Shader Model 2.0, 3.0, and DirectX10’s 4.0, CryEngine2 is also multi-threaded to take advantage of dual core SMP-aware systems and Crytek has developed their own proprietary physics system, called CryPhysics. However, it is noted that actually playing this game is a bit slower than the demo implies.

All of our settings are set to maximum “very high” including 4xAA and we force 16xAF in the control panels. Here is Crysis’ Island Demo benchmark, first at 2560×1600 resolution: 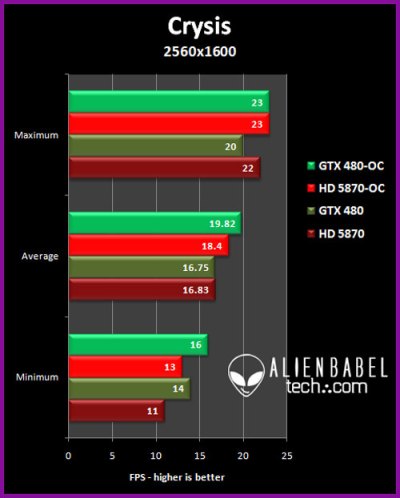 Crysis at 2560×1600 still requires at least multi-GPU to play smoothly. At stock clocks, HD 5870 and GTX 480 are pretty much neck-and-neck overall although the Radeon will slightly stumble at times. Perhaps the larger framebuffer of the GTX makes a difference. Overclocked, the GTX pulls away from the Radeon.  Neither of our overclocked video cards played this game at maximum resolution particularly well; not even without AA/AF – but this time the overclocked  GTX 480 pulls slightly ahead of the overclocked HD 5870; a change from the ranking of their stock clocks.  GTX 480 appears to scale a bit better as it is overclocked. 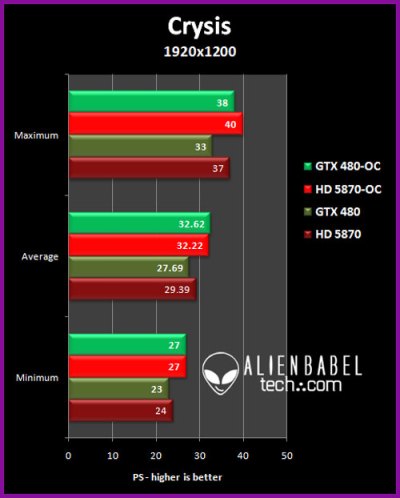 This time the performance is closer.  Both of our top cards are now playable with Crysis at 1920×1200 if you are willing to compromise with AA/AF or lower a couple of detail settings. This time the overclocked GTX 480 catches the overclocked HD 5870 and edges it slightly performance-wise in the averages; a subtle change in ranking from their stock clocks. 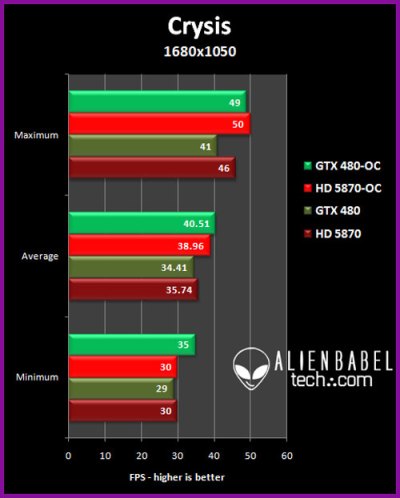 The Radeon HD 5870 is slightly faster than the GeForce GTX 480 when both are stock clocked in Crysis.  When they are both overclocked, the GTX is now a bit faster in the minimums and averages.  We might also point out that the new GTX 480 is still running on beta release 197.17 drivers while the AMD cards have mature drivers in Catalyst 10-3a. We will revisit this benchmark every month in our Catalyst and GeForce driver performance analysis and report any changes that we may find.