DJ tells us that according to GPU-Z, the GPUs used in this card consist of 1440 stream processors just like the GPU used in the HD 5850. Along with the pictures, DJ sends his regards. 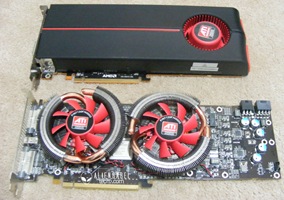 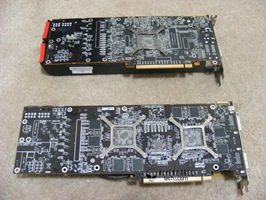 Seen above is the HD 5950 on the right, showing us its three video outputs. Two DVI and one mini-Display Port can be seen on the PCI bracket.

We really don’t know what this card is.  It could be an engineering sample that may never see the light of day as AMD has very strongly denied the existence of “5850-X2” when we contacted them about this card.

However, we are dedicated to bringing you the very latest news as it arrives.  Our other sources tell us that the NDA on HD 5970 (5870-X2) expires on the 19th of November.  We also know that AMD will be handpicking Cypress chips for their HD 5870-XTX which is due in Q1.  Expect a big surprise from AMD, also in Q1.