Picture having the capacity of a 4 terabyte (TB) flash drive with the convenience of transferring data quickly from one PC to another.  For less than forty dollars, the Newer Technology Voyager S3 SuperSpeed USB 3.0 Interface SATA 6Gb/s Drive Docking Solution promises, “the Easiest Way To Access Data From ANY 2.5″ or 3.5″ Serial ATA (SATA) Drive Up To 4.0TB!”. 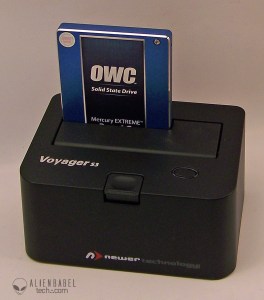 Newer Technology Voyager S3 allows its user the equivalent of turning any SATA hard disk drive (HDD) up to 4 TB, or any Solid State Drive (SSD), into the equivalent of a flash drive over the super-fast USB 3.0 interface.  To access a drive without a dock, the PC’s case usually has to be opened which is very difficult to do especially with a notebook PC.  With the Voyager S3, the drive is inserted into the dock much like a game cartridge was plugged into a console of years past, and the data is accessed like any other drive over the USB 3.0 interface.

Hard drive docks are not new and two years ago, ABT editor Leon Hyman evaluated Thermaltake’s BlackX Duet USB 2.0 dock.  That dock has proven very useful to this editor also; and although using USB 2.0 to transfer large amounts of data is almost painfully slow now, the speedy eSATA connection makes it useful to this day.  However, we did notice issues with the Thermaltake dock sometimes requiring a reboot to eject or to safely remove a drive, or with a drive not being recognized for drive imaging.  We have also been using the Newer Technology Voyager S3 for a few months and it has some advantages over the Thermaltake dock.

Let us take a closer look at the Voyager S3 beginning with its features and specifications on the next page.