We received the NH-DH14 flagship CPU cooler from Noctua for evaluation before we received our Ivy Bridge Core i7-3770K.   For our initial evaluation of the i7-3770K, we used our thirty dollar Cooler Master Hyper N212+ to reach 4.2GHz as we were comparing it to our Core i7-920 also at 4.2GHz.  Ivy’s temperatures at 4.2GHz are reasonable with a budget cooler but we are interested in clocking our CPU higher with 5.0GHz being our goal.

At the time of our original Ivy Bridge evaluation, we were using a mid-tower Cooler Master Elite 430 case and a Z77 mATX motherboard – the Gigabyte GA-Z77MX-DH3 Series 7.  We had just completed our Ivy Bridge evaluation when the GTX 690 arrived and we needed our Core i7-3770K to be overclocked further.  Although there was barely enough room in our mid-tower, we installed our Noctua NH-DH14 anyway, and aimed for clockspeeds as high as Ivy could stably reach just for the GTX 690 evaluation. 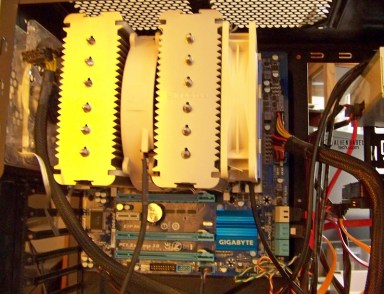 As you can see, Noctua’s NH-DH14 is a beast – it takes up half of the total area of our motherboard!  However, as Noctua’s flagship cooler, it is not only expected to be efficient and effective, it is expected to be quiet.  With 12 heatpipes total in a dual fin-stack and with dual asymetric fans, it is a very good thing that either fan is easy to remove, especially to access the memory DIMMs and also its mounting hardware.

Since we are testing faster graphics including the GTX 690, we need to increase the speed of our CPU and this evaluation is our adventure in overclocking Ivy.  Our mATX Gigabyte motherboard was simply too small for large multi-GPU cards, so we upgraded instead to a full-size ECS Z77 Gold Series motherboard and a full-tower Thermaltake Overseer RX-I for the bulk of our tests.

Noctua is an Austrian company that specializes in making very quiet, efficient and effective CPU coolers.  This is the second time that ABT is evaluating Noctua CPU coolers.  Over two years ago, we gave high marks to their Noctua NH-U12P SE2 CPU Cooler and NF-P14 FLX 140mm Fan.  In fact, Noctua is using the same NF-P14 FLX 140mm fan together with their NF-P12 120mm fan to asymmetrically cool the dual fin stack of the NH-DH14.  The larger 140mm fan overhangs the cooler fins and helps to cool other components on the motherboard that would otherwise be starved for air circulation as they are covered by this large cooler assembly.

Noctua has succeeded in creating some very quiet fans and excellent CPU coolers and are able to price them competitively.   Also, Noctua recently released their improved NF-F12 PWM fans which brought even more quiet efficiency to their fans with higher static pressure due to their redesign, and now we get to evaluate their flagship NH-DH14 CPU cooler.

In comparing the last three CPU coolers that we have tested, the 5-heatpipe Thermaltake Frio is $65.99 at Newegg.com. The 6-heatpipe  Frio OCK is currently $74.99 at Newegg and it is similarly priced to our Noctua NH-U12P-SE2 at Newegg for $75.99.  However, the Noctua NH-DH14 is considered premium-priced although it is only $89.99 at Newegg and about the same price at Amazon.

Saving Money on a CPU Cooler

As important as saving money on hardware is, this editor believes that the choice of a CPU cooler is critical to any PC build. The cooler should never be cheap or retail. Too much depends on it if you value keeping your CPU cool and especially if you plan to overclock. It is highly recommended that you instead look for sales and use rebates to save money.

This review is not just about “value” and rock-bottom pricing. A quality universal CPU cooler may be used for years and can be moved from build to build.  If you want to cool a Phenom II X4 or even an X6, a value CPU cooler such as a Coolermaster Hyper N 212+ will suffice. Even Intel Sandy Bridge and Ivy Bridge CPUs such as Core i5 and Core i7 run relatively cool until you begin to push the core speeds up to about 4.5GHz or so.  Here is the NH-DH14 compared side-by-side with a Cooler Master Hyper N212+ 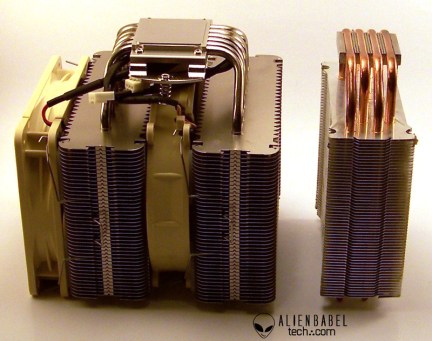 Unless you are supplying a relatively high voltage to most CPUs, a budget quality cooler will work nicely. Even stock heatsinks are evolving to keep up with the hotter running quad-core and hex-core CPUs. Of course, the FX series of AMD CPUs almost require watercooling or a high-end air cooler and a very beefy power supply unit (PSU) if you are really serious about a Bulldozer overclock in excess of 4.4GHz as we were.  And the clocks that we are attempting to hit with Ivy Bridge are also going to require some serious voltage and cooling that only a premium air or water cooler can provide.

CPU core temperatures go up especially as more voltage is applied to get more MHz and more performance.  With our Ivy Bridge Core i7-3770K, the core stays relatively cool with stock voltage up to 4.2GHz and any decent cooler will do.  However, to get clocks over 4.5GHz, it takes disportionately more voltage for each 100MHz gained and the temperatures rise quickly, overwhelming ordinary coolers.  And this is why these premium air coolers like the Noctua NH-DH-14 are necessary to keep temperatures down so as to squeeze every bit of performance out of an overclocked CPU.

What differentiates Noctua from other high-end coolers, is quiet cooling.   For about ninety dollars, the NH-DH14 is a complete package that offers everything you need to cool your overclocked CPU, including thermal paste.  A relatively large tube of Noctua’s professional grade NT-H1 thermal compound is included.

Heat is drawn away from the CPU by the base of the heatsink and is transferred up into the array of hi-grade aluminum fins for dissipation. One 120mm fan spins on one side of the heatsink fins array in a “push-pull” configuration with a 140mm fan in the center of the two fin stacks; blowing cooling air through the heatsink fins. 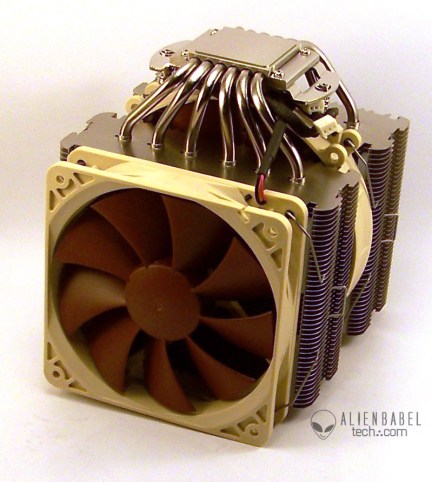 The NH-DH14 ships with Noctua’s multi-socket mounting system that is one of the easiest and most straightforward installations that we have ever encountered for any Socket, including 1155.  It is also adapted for 1156 and 775 platforms and Intel’s latest extreme 6-core CPUs as well as AMD socket AM2, AM2+ and AM3/AM3+ platforms.

Before we test the Noctua cooler to get Ivy’s clockspeed as high as possible, let’s unbox, install, and test them individually using OCCT 4.1 as an extreme test to load all of the cores of our CPU at 100%.