This is the third time that ABT has been priviledged to attend Nvidia’s GPU Technology Conference (GTC).  GTC 2012 was held May 14-17, 2012 in San Jose, California. The very first article that this editor wrote for AlienBabelTech covered Nvision 08 – a combination of LAN party and the first GPU computing technology conference. The second time was the following year at GTC 2009 when it was held in the Fairmont Hotel, also in downtown San Jose. 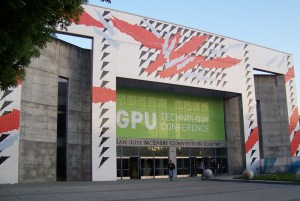 Each attedee at the GTC will have their own unique account of it.  The GTC is a combination trade show/networking/educational event attended by 2800 people each of whom may have their own unique schedule and personal reasons for attending.  All of them have in common their passion for GPU computing.  This editor’s primary reason for attending this year was for the minority report – the interest in Kepler GPU technology primarily for gaming, and he was not disappointed.

Nvidia used the GTC to debut a great array of new technology since the new 28nm architecture Kepler generation of GPU processing power is much more than a simple upgrade over Fermi.  Kepler is much more powerful as well as energy efficient, and Nvidia intends to use it to revolutionalize GPU and cloud computing, including for gaming.

Well, things have certainly grown since the first GTC in 2009 and the pre-GTC, Nvision08.  Nvidia is again using the San Jose Convention Center for their venue just as they will do for 2013 – returning to their original venue for Nvision08.   And this time it was also much bigger and it has been expanded to four days, up from their three-day GTC conference in 2009 held in the Fairmont Hotel.  Not only that, the schedule was far more packed and this editor was forced to make some hard choices, to attend some of the sessions and to skip others.

The GTC at a Glance

Here is the GTC schedule “at a glance”.  We took this image on Monday as it was mostly set aside for the hard-core GPU programmers and the press orientation.  After that, there was always a crowd surrounding this sign.  We will take a look at each day that we spent at the GTC.

We arrived Monday afternoon, flying from Palm Springs to San Francisco airport in just over an hour.  The temperature in Palm Springs was 105F and San Francisco was 55F!  San Jose, 35 miles inland, is more moderate with temperatures for the entire 5 days that were perfect, with daytime highs in the 70sF.

After picking up the press pass and a 180 page GTC Program Guide and many pages of press-related material, this editor returned to the room so as not to look like a GPU tourist. It’s bad enough to feel like one is in college again.  Nvidia treats their attendees and press well, and gives a nice insulated bag included with the $900 all-event pass to the GTC.  The press gets in free.  A cool commemorative GPU Technology T-shirt was included with the bag and it is useful as it is large enough for grocery shopping for years to come.  These are practical items. This editor still has his Nvision08 T-shirts and insulated stainless steel mug from the 2009 GTC.

Monday was set aside for the hardcore programmers and the developer-focused sessions were mostly ‘advanced’.   There was a poster reception between 4-6 PM and anyone could talk to or interview the exhibitors who were mostly researchers from leading universities and organizations who were focusing on GPU-enabled research.

The press had an early 6-9 PM evening reception at the St. Claire Hotel across the street and this editor got to meet some of his friends from past events and also made new friends.  Mostly the smaller hardware sites like ABT did not attend the GTC.  The GTC is also all about networking.  There are those looking for capital for starting or building businesses, and those with venture capital to lend, and of course, advertising.   Most of all, it was for sharing information to advance GPU programming.

There were dinners scheduled and tables reserved at some of San Jose’s finest restaurants for the purpose of getting like-minded individuals together.  And discussions were scheduled at some of the dinners; some of them were devoted to discussing programming while others talked business, or just enjoyed the food.

ABT forum members and readers are particularly intersted in the Kepler architecture as it relates to gaming and we knew that very little would be said about the GK110 as a gaming chip.  However, we were not disappointed as Kepler is definitely oriented toward gaming, graphics and computing.  And Jensen’s Keynote on Tuesday reinforced Nvidia’s committment to gaming and a new foray into Cloud Gaming as Kepler is the world’s first Virtualized GPU built to compensate for latency issues inherent in today’s online streaming games.