Bahrain based etailer, Advanti has revealed that they have received official prices on the upcoming six core processors from AMD. Here’s what they had to say on their facebook page

What’s interesting to note is that the TDP on these new 6 core behemoths is the same as current quad core Phenom II X4 955 and 965 C3 models. From the looks of it, AMD has optimized it’s 45nm SOI (Silicon on Insulator) process for low power usage to fit six cores in 125W thermal envelope and run them at 3.2 GHz which is the same clockspeed as the Phenom II X4 955. We could be in for some mouth watering half a dozen rocking overclocking treat like last year when the Phenom II X4s were put under the LN2.

Featured below is what looks to be the die shot of the ‘Thuban’ core used in these upcoming six core CPUs. 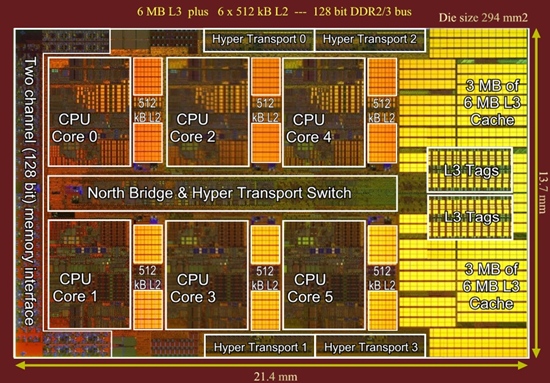