Hard drives have been increasing in capacity over the years. A decade or so ago, when I got my first PC with a floppy drive, the software and games were small enough to fit on a 1.44MB floppy disk. The hard drives sizes back then were measured  in megabytes (MB). A Gigabyte (GB) sized hard drive was hard to even imagine in the consumer space.

Fast-forward to today. We see hard drive sizes in the order of many hundred GBs. In this age of digital boom, we all need to store our images from digital cameras, gigantic High Definition (HD) videos, vast music and huge backups. The result is that, 1 Terabyte (TB) is the magical number now for hard drive sizes. And manufacturers have tried to satisfy our appetite for bigger and bigger-sized hard drives by releasing 1 TB hard drives. All of the major hard drive manufacturers now offer a 1 TB hard drive in their lineup with Hitachi being the first to reach that milestone.

This increase in capacity has been achieved by cramming more and more data onto a single platter. The amount of data that can fit on a single platter is called the areal density. Increasing the areal density also results in a speedup while accessing data, as it is faster to transfer data from one platter rather than having to pick some of the data from one platter and the other part from another platter.

With the launch of the 7200.12 family of hard drives, Seagate has achieved an areal density of 500 GB per platter. At the time of writing, the only other manufacturers to achieve a similar number is Samsung with their F3 line of drives and Western Digital with their Caviar Green 2 TB drive. The platters spin at 7200 rpm, a speed that most consumer hard drives use. The Seagate Barracuda 7200.12 1 TB hard drive that we are reviewing today, uses two platters of 500 GB each to reach the advertised capacity of 1 TB.

The previous 1 TB hard drive from Seagate, the 7200.11 1 TB, used four platters with an areal density of 250 GB. As the number of platters in the newer drive are halved, you should typically expect power consumption to decrease and speeds to increase. According to Seagate product overview papers (PDF File), “The Barracuda 7200.12 drive uses fourth-generation Seagate perpendicular magnetic recording technology to increase capacity and dependability by storing data bits vertically rather than horizontally.”

Here are the specifications of Seagate’s 7200.12 family of hard drives 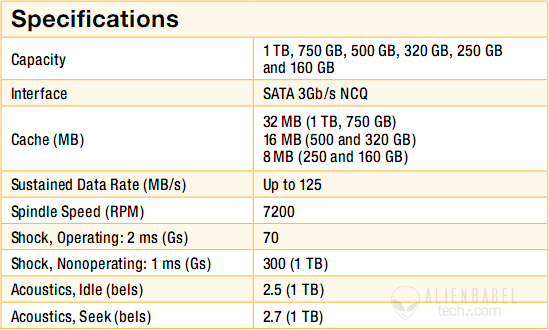 More information about Seagate’s 7200.12 family of drives can be found by reading the PDF documents below:

Let’s take a look at our test subject before moving on to the benchmarks: 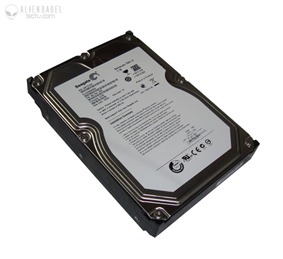 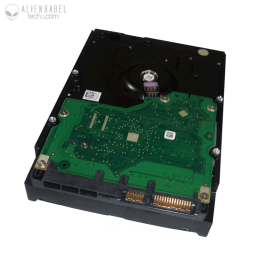