Complete with a built-in headset stand, the Thermaltake full tower Chaser MK-I was created for gamers. It is a show-off case and it transforms into a variable LED light show at the touch of a button. It has all of the features of high-end watercooling-friendly cases, including dust filters everywhere.  Best of all, the interior is spacious and it is also nicely-painted black. But it goes far above and beyond that with an easily accessible external HDD/SSD dock on the top of the case that is so useful that you will wonder how you got by without it before.

The Chaser MK-I has superb airflow partly thanks to 3 large fans with options to install extra cooling fans for extreme hardware.  In its stock configuration as tested and as pictured by Thermaltake’s own professionally rendered image above, there are 200mm each front intake and top exhaust fans, and a 140mm rear exhaust fan.

There is no side case fan although the enthusiast can purchase a 200mm Thermaltake ColorShift fan and easily install it as provisions are already made for it.  Having only two ColorShift fans in such a large case may be insufficient to produce a satisfying light show, perhaps when compared to the smaller oversized mid-tower Thermaltake Element G with 3 included Color-Shift fans.

We received a Chaser MK-I from Thermaltake a few months ago and we have been using it extensively with our most difficult to keep cool system.  It’s suggested selling price is $169.99.  To compare, the Thermaltake Element G oversized mid-tower, which we loved and reviewed here, is $145 plus $20 shipping at Newegg.  The full-tower is actually less expensive as Newegg has the Chaser MK-I – winner of Newegg’s 2011 Reader’s Choice Award – shipped for $139.99 after a $15 mail-in-rebate! 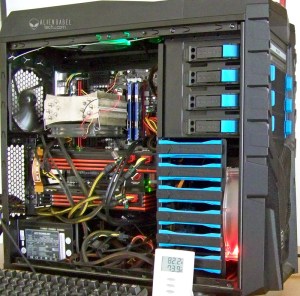 Since it passed and we are extreme, we added another 4th hot running GPU in the form of a second HD 6970 plus HD 6990 for HD 6970-X4 QuadFire! And of course we shall give you the details of our testing and the results as well as our conclusion about the Chaser MK-I.

The Thermaltake Chaser MK-I will easily accommodate the largest graphics cards including the reference version of the HD 6990, to over 12 inches. Although it comes with 3 fans, the Thermaltake Chaser MK-I gives the consumer many options to customize it for themselves. It is not considered budget at $169.99 and it does not compete directly with any case that this editor has reviewed except for the smaller Element G which is close in price.  The Cooler Master HAF would be the Chaser MK-I’s competitor.  ABT Editor Leon Hyman reviewed the 922 here.

If one considers the alternative of buying a smaller and less-expensive case and then adding three or four fans at $20 each and customizing it themselves, they will pay about the same price but it will not be a full-tower.  It will not have the variable LED lights nor the superb airflow promised by the Thermaltake Chaser MK-I.  And it will not have a HDD dock built into the case!

We have been using this case for over three months and we will share our experiences of building a system inside the Thermaltake Chaser MK-I with our readers, including installing watercooling for the FX-8150. Naturally, we really wanted to put this Chaser MK-I case and our hardware through its paces with HD 6970 TriFire-X3 and even X4 while playing games as the most intense real world stability test to stress the Chaser’s ability to cool an extreme system.

To make things far more difficult for our case’s ability to cool, we went for the highest overclock of our FX-8150 to date – to 4.6GHz – and we actually needed two PSUs for a total of 1625W to run our games stably using two video cards with three linked GPUs between them.  Most portable consumer space heaters are 1500W in comparison! 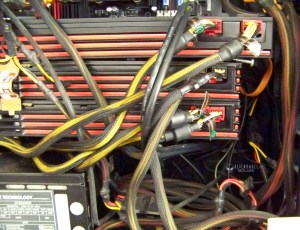 Well, TriFired HD 6970s turned out to be relatively cool so we also added another hot-running HD 6950-flashed-to-HD6970 for QuadFire-X4! This is an extreme test of any case’s ability to cool the hardware inside – a test that can make lesser cases sweat. Of course, we will report our final temperatures and results as we attempted to turn our Thermaltake Chaser MK-I into a 1625W space heater.  You might not want to try this at home without a side case fan, and realistically, these three cards should not be run in such close proximity to each other except under GPU watercooling.

The aim of Thermaltake is to give their consumersvalue and functionality with a large “everything included” full tower. It has has an aggressive look that gamers will like and it features a large (scratch resistant) plastic window as well as a mesh side panel that shows off its all-black interior.  The Chaser MK-I boasts much larger dimensions than any mid tower case including the Cooler Master Elite 430 and the oversized Thermaltake Gladiator 600.

The Chaser MK-I is all-purpose but it is not conservative-looking and some might take issue with the blue accents, especially if you prefer the red or green LED lights to be prominent.  Here is the Thermaltake Chaser MK-I set alongside a regular sized mid-tower, the Cooler Master Elite 430. 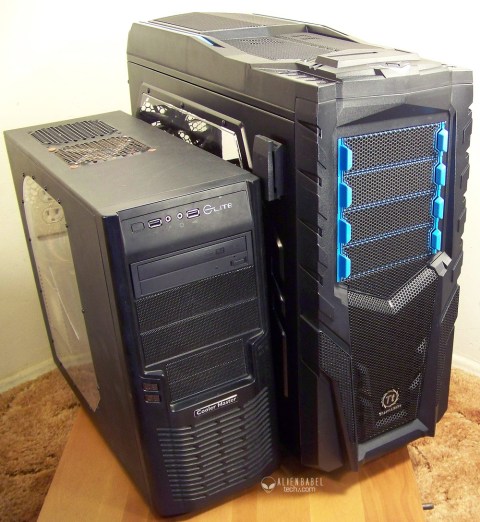 A case like the Elite 430 will almost fit inside of the Thermaltake Chaser MK-I.  The Chaser is a full-tower case with a large, roomy all-black interior and we found it really easy to fit our hands around the hardware that we installed inside as we shall describe later on.  The differences between working with a mid-tower and a full-tower is a similar experience to a mechanic working on sub-compact cars and who then works with large vehicles. There is much more room to work with in a full tower over a mid-tower.

The Chaser MK-I case is a handsome case but a picture does it little justice compared to “in person” and our own images will simply attempt to capture the excitement and experience that we had when building a new PC with this well thought-out full tower case.

The top and front fans are protected by a fine plastic mesh that also acts as an effective dust filter. They are removable and easily cleaned.  The side panel allows for an optional 200 mm fan to be positioned behind the fine plastic mesh.  We notice two three-color LEDs are included with the case.   For a case of this size, an included third LED fan might have been a great idea.

There are two buttons to adjust the case fan’s RPMs – either low, 600 rpm; or high, 800 rpm.  High increases their noise slightly as they reach their maximum performance mode; something you are not likely to hear over any but the quietest video cards. The Chaser MK-I looks really nice especially at night where the following image was captured in low light conditions and accented by the blue on the front panel. 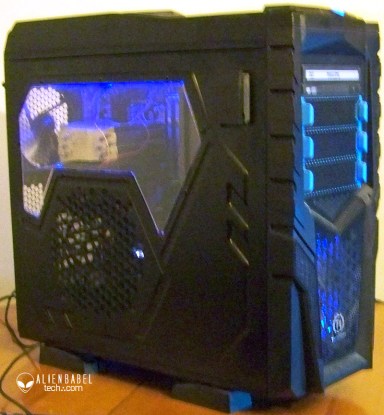 The blue decorations on the front of the case look great in blue light.  However, they tend to clash a bit with red and green.  Of course, the enthusiast may just fill all of his drive bays with optical drives.

Thermaltake considers themselves to be a relatively “new” company that formed in 1999 although that is more than twenty two years ago. They have been at the forefront of creating new and exciting products since the time where most computer users were provided with little to no choices for components that may seem irrelevant, but in reality are crucial to the performance of a PC. Their Chaser MK-I case is part of the Thermaltake philosophy of what they call, Key 3 Spirit Initiative of Case, Cooler and Power Supply which is based on quality, performance and reliability. 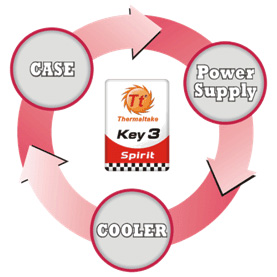 Key 3 Spirit initiative is based on the strength and know-how that Thermaltake has mastered through innovation and continuous research & development that encompasses crucial components of a personal computer responsible for thermal management.

If a picture is worth a thousand words, then the following image conveys Thermaltake’s dedication to their customers. 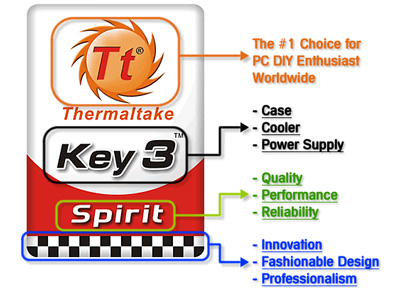 Now that we know about Thermaltake’s philosophy, let’s see how it is expressed in their Chaser MK-I case.