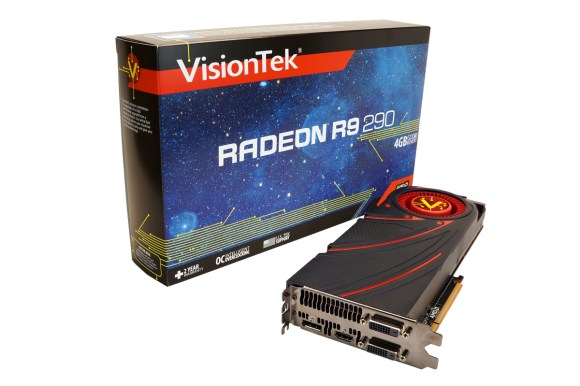 When running popular games such as Battlefield 4™, Crysis 3, and Tomb Raider with a 4K (3840 x 2160) display mode setting, the R9 290 delivered superior frames per second performance to the GTX 780:

Overclocking Via Easy to Use GUI

The VisionTek R9 290 can be set to automatically run higher than the base core speed if it is operating below power, current, and temperature specification limits via the Boost State control within the easy-to-use card management GUI.

See What You’ve Been Missing with 4K Resolution

The VisionTek R9 290 supports Ultra HD 4K (3840 x 2160) resolution, which is 4x the resolution of 1080p. Typically, configuring a graphics card for use with a high resolution monitor must be done manually. However, AMD’s Catalyst™ Graphics Drivers will perform automatic configuration on select popular 4K monitors, including models from Sharp and Asus. Further simplifying the ability to use 4K displays is the card’s use of AMD Eyefinity™ technology which can span multiple monitors into one large panoramic display.

Hear What You’ve Been Missing with TrueAudio

With an onboard audio processing chip powering AMD’s TrueAudio technology, the VisionTek R9 290 can deliver accurate 3D surround sound within games and special audio effects like reverbs and room simulations while reducing CPU load. Now you can hear more real-time voices and situational sounds in-game with any and all audio hardware already owned.

A History of Performance Innovation

Outperforming other GPU powered brand graphics cards is nothing new to VisionTek. By choosing AMD as its exclusive GPU partner, VisionTek has enjoyed a history of establishing new standards of performance capabilities from its graphics cards:

“There’s nothing on the market that can touch the Radeon R9 290’s price/performance value proposition,” said Mark Bilson, Executive Vice President of VisionTek. “It will even challenge the GeForce TITAN which costs $550 more. Then add in all the automatic performance management and user configurable operation options and you have an instant hit that will surely resonate with gamers of all levels.”