The video cards used in this article were boxed retail editions purchased with my own money. By including a given video card in this review, I’m not necessarily implying it’s either price and/or performance competitive with other cards in the review.

Today I’ll be testing the performance of ATi’s Radeon 5770. This article is part one in the series and future installments will analyze bottlenecking and image quality.

ATi is positioning the 5770 as an upgrade for the 4850/4770, so the comparison to a 4850 will be of particular interest. Also given the retail price of a GTX260+ is only about $20 USD more than a 5770, a direct performance comparison between the two will also be useful. I’ve also included a GTX285 as a matter of interest because it signifies nVidia’s current single GPU flagship, and because it’s my primary gaming card.

But first, here’s a brief introduction about the card. The 5770 chip is codenamed Juniper (unofficially RV870) and is based on ATi’s second generation 40 nm technology. It adds notable features such as DirectX 11, Eyefinity (multi-display gaming), full-scene super-sampling, and angle invariant anisotropic filtering. In terms of processing power and memory bandwidth, a 5770 is basically a 5870 (Cypress) chopped in half.

Here are the theoretical specs of the four cards I’ll be testing today: 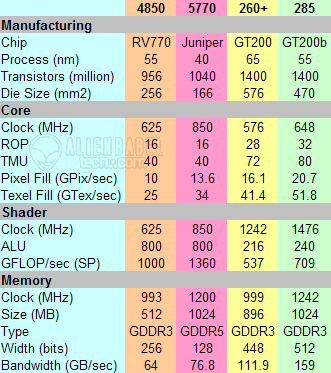 As you can see, the two nVidia boards have a substantial advantage with respect to pixel and texel fillrate, along with memory bandwidth. This is courtesy of more ROPs, TMUs and a wider memory bus. In particular, the GTX285 has over twice the bandwidth of the 5770.

The Radeon cards have the advantage in shader processing, courtesy of their Vec5 shader design. Notice that the 5770 is able to get away with only a 128 bit memory path, courtesy of GDDR5. Also at just 166 mm2, the 5770’s die size is positively tiny compared to the other cards.

Of course theory doesn’t always translate into reality, which is why we run gaming benchmarks. The benchmarks have two columns labeled % 4850 and % 260+. They represent the performance gain (or loss) of a 5770 compared to the listed card in that column. If the column is highlighted red then the 5770 is faster relative to that specific card by that percentage. If it’s yellow or orange it means the 5770 is slower than the listed card (GTX260+ or 4850) by that negative percentage amount.

Since TrAA isn’t comparable to AAA due to the vendors using different techniques, all benchmarks are tested with it off. For more information about this, please see my image quality comparison between the two vendors.