The brand new Cooler Master Elite 430 Black is an interesting case.  It has many of the features of high end cases – including dust filters, and the interior is nicely painted black.  It would be considered budget at $59.99 but it does not compete with the Gladiator 600 which costs about ten dollars more and to which we gave an outstanding award here.  Rather this Elite 430 case is a roomy mid-tower that will fit the largest graphics card(s), yet it only comes with one fan, giving the consumer many options to customize it for themselves.  Naturally we are extreme and we really put this case and our hardware through its paces with a GTX 480 plus an open-design 8800-GTX as PhysX card and FurMark’s most intense stability test to test the Elite 430’s thermal characteristics and airflow.  Of course, we will report our results as we attempted to turn it into an oven.

The aim of Cooler Master is to give their Elite 430 value and functionality to their consumers with an entry level mid tower.  It has has a classic look and a large side panel clear plastic window shows off its all-black interior.  Although it has the same external dimensions as most mid tower cases including the Gladiator 600, its main purpose appears to be to support extra-long graphics cards including the dual-GPU HD Radeon 5970 and large CPU tower coolers.  Here is the Cooler Master Elite 430 as imaged professionally. 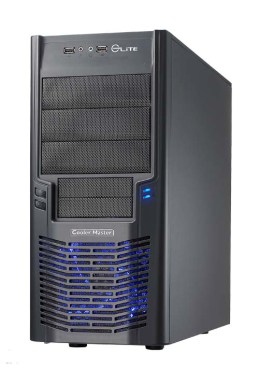 From the image (above) from Cooler Master’s site, we see the Elite 430 case is handsome indeed. Yet even a professionally captured picture does it little justice compared to “in person” and our own images will simply attempt to capture the excitement and experiences we have when building a new PC with a quality value case.  We notice the blue LED as part of the included 120mm fan behind the plastic mesh that also acts as a dust filter and it adds a nice touch although it would be nice to be able to shut it off.  It looks really nice especially at night where the following image is captured in low light conditions as part of our thermal test.  Here we see the 8800-GTX fan’s blue LED color coordinates with the Elite 430 blue case light rather nicely. 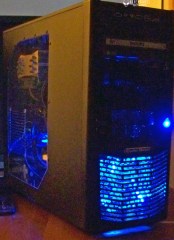 We have come to appreciate Cooler Master during the 20 months that ABT has been reviewing hardware. They stand out as a company that is dedicated to creating great cooling solutions and their innovations are impressive. What this editor finds to be especially refreshing is that they are very responsive to comments and even constructive criticism from the end user. As an example, it was suggested that their entry-level cooler Hyper N520 was time consuming to change out in this review because you had to remove the motherboard. We even contemplated cutting a hole in the motherboard tray to allow access. Well, Cooler Master actually does this with their newer series of cases, including the Gladiator 600 and Elite 430.