The mystery of the Motorola Shadow keeps getting deeper and deeper. After the previous three leaks here, here and here. Today, somebody over at howardforums posted a screenshot from the Quadrant Benchmark application for Android. Here is the official description of the benchmark:

The initial release for Android smartphones is now available on Android Market. This release targets Android SDK 1.5 and OpenGL ES 1.1. 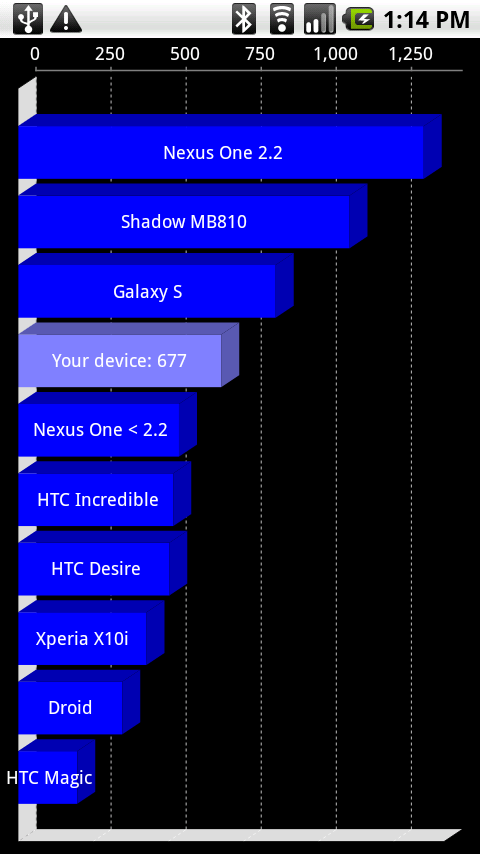 For reference this benchmark was run on a DROID at 1.2 GHz.

Here are the results in tabular form:

From the above result, it is obvious that Nexus one with Android 2.2 is fastest device. But look at the Shadow, it’s faster than Galaxy S and the Nexus One with Android 2.1. Our prediction is that the Shadow is most likely running Android 2.2, as we don’t expect the PowerVR SGX 530 GPU in the OMAP 3630 to beat the PowerVR SGX 540 GPU in the Hummingbird CPU in the Galaxy S. For a detailed analysis of Hummingbird vs Snapdragon, look here.

So what does this mean ?

1. Shadow will be slower than Nexus One if it is running Android 2.2 and comes with the rumored specs here. But the good news is that it will launch with Android 2.2.

Exciting times ahead for sure. Stay tuned!