Exploring “Frame time” measurement – Part 2 – Is the SSD “smoother” than the HDD in Gaming? 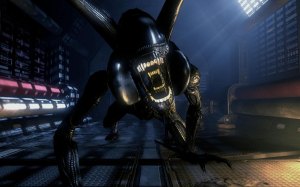 Aliens vs. Predator, known to fans as Aliens versus Predator 3 or AVP3 is a video game developed by Rebellion Developments, and published by Sega in February 2010. It is the sixth game of the Aliens versus Predator game series. There are three campaigns in the game, one for each race or faction that form one main storyline although they differ in objectives depending on your choice of campaign.

Alien vs Predators DX11 benchmark is a stand alone bench that is only for DX11 cards. It is more demanding than actually playing the game generally. We use a benchmark tool at 1920×1080 with maxed out settings plus 4xAA.

Let’s go right to the graphs and first check the basic tests with the default benchmark score using the SSD which has the same average as the HDD. 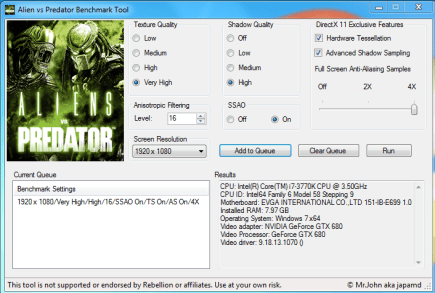 We now see nearly the same score using the HDD and the built in bench as with Fraps. 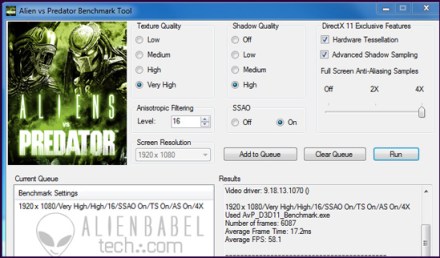 And now the SSD results for a frame rate comparison: 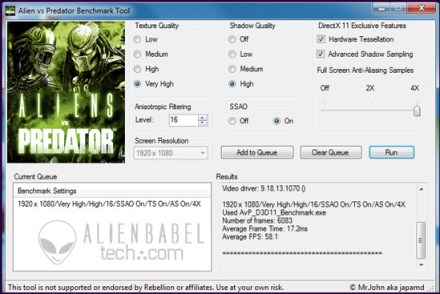 Framerates are essentially identical. Lets’s look at the frame time chart for the HDD.

Now check out the frame time chart for the SSD:

There is about as much variety between the charts as there are between individual runs.

Here is the HDD ranking:

Here is the SSD ranking:

There is really no difference.  Let’s on to a new game that is one of ABT’s newer benchmarks, Sleeping Dogs.