Let’s only look at the games where there is more than a single FPS difference between the two GTX 770s. 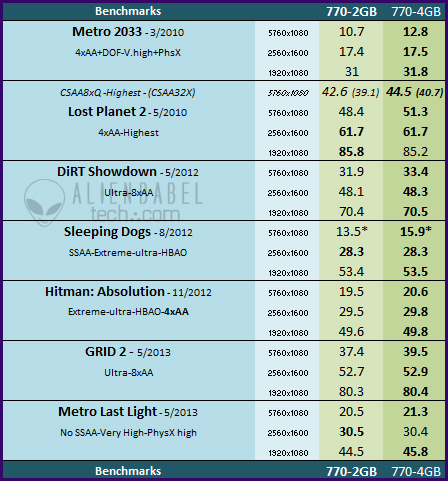 Metro: 2033 is completely unplayable on either card at our highest resolution, and even GTX 770 4GB SLI wouldn’t be playable either.  Sleeping Dogs has a problem actually displaying on the outer LCDs although the performance is cut, so this benchmark has to be discounted.  This leaves five games out of 30 where a 4GB GTX 770 gives more than a 1 frame per second difference over the 2GB-equipped GTX 770.  And one of them, Metro: Last Light still isn’t even quite a single frame difference.

Of those five games, two of them are unplayable at 5760×1080 although in these cases, 4GB GTX 770 SLI would finally make some sense over 2GB GTX 770 SLI.  That only leaves Lost Planet 2 and two racing games that gain some advantage by choosing a single GTX 770 4GB card over the single GTX 770 2GB.  And in Lost Planet 2, we were able to add even higher anti-aliasing – from 8xAA to CSAA8XQ and to CSAA32X – but the performance difference was greatest with 8xAA.

There is one last thing to note with Max Payne 3:  It would not normally allow one to set 4xAA at 5760×1080 with any 2GB card as it claims to require 2750MB.  However, when we replaced the 4GB GTX 770 with the 2GB version, the game allowed the setting.  And there were no slowdowns, stuttering, nor any performance differences that we could find between the two GTX 770s.

Let’s head for our conclusion.