High Performance Gaming on a Budget: Building a Value PC with Cooler Master

–The purpose of this ongoing “value” series is to pinpoint the CPU/platform “sweet spot” for upper midrange graphics performance with both GTX 280 & HD 4870-X2 class of video cards at both 1920×1200 and at 1680×1050 resolutions as they are the popular widescreen gaming resolutions for DX10 games.

This editor has always emphasized bang for buck even though there has been no compromise so far. We have continually upgraded our PC to get even the slightest performance advantage for gaming at 1920×1200 and 1650×1080 resolutions. We started out benchmarking last Summer with a Core2Duo E4300 (1.8 GHz stock clock), which we managed to overclock to 3.3 GHz with AMD’s HD 4870 TriFire, on a PCIe 1.0 P35 motherboard with 16x+4x PCIe CrossFire lanes. We got great framerates in a lot of modern games that we benchmarked here at ABT for you in this review. However, by simply upgrading to the newer Core2Duo E8600’s architecture at the same 3.3 GHz, we netted some nice performance gains and a further overclock to 3.99 GHz (and later on to 4.25 GHz) gained some more framerates for us in a few critical games as we reported in this article. 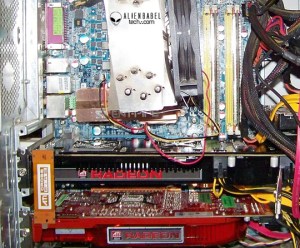 We weren’t completely content with our PC as we also found out that by using a 512MB vRAM HD 4870 paired with a 2 GB HD 4870-X2 in TriFire, it held us back in a few games and so we upgraded to HD 4870 1GB to pair with our HD 4870-X2 GB video card. Upon further testing, we upgraded our P35 Intel chipset motherboard to our current X48 ASUS Rampage Formula because we found a game or two where the 16x+4x PCIe CrossFire lanes restricted our bandwidth so as to be noticeable and we now have 16x+16x PCIe lanes for Crossfire. We even noted that in a few cases, PCIe 1.0/1.1 limited the bandwidth for a single-GPU video card, compared to PCIe 2.0 as this review pointed out.

Further, we tested Intel’s engineering sample of Q9550s (2.83 GHz stock) at 4.0 GHz against our E8600 at 4.25 GHz and found the dual core to be lacking in a few games in this article that was most notable with CrossFire. Clearly the faster core speed of the dual core could not compensate for the “extra” two cores of our Q9550S. As a result, we have been benchmarking exclusively with quad core.

We even ran Vista 32 against Vista 64 and picked the 64-bit operating system for our continued benching in this review – but not for gaming reasons; rather we will eventually utilize more than 4GB of system RAM. We examined CrossFireX here and determined that it is sometimes financially and/or performance wise to pair a stronger card with a weaker one, especially if the slower card can be overclocked. And we revisited our earliest benches in our latest review to finally conclude that the top video cards of the last two generations and the midrange cards of today are no match for maxed-out DX10 gaming at higher resolutions; especially if filtering is used. We learned a lot along the way from our hardware upgrading adventure in PC gaming and graphics, and we have especially enjoyed sharing our findings with our readers as we upgraded our Intel Penryn platform to about as far as it can go. The only further logical upgrade for our PC is to Core i7 when we have faster graphics than our current HD 4870-X3 Tri-Fire.

We are deep in a world-wide financial recession, and although most gamers would love to upgrade regularly and have Tri-Fire or SLi graphics systems powered by the most expensive overclocked quad core CPU to play their DX10 PC games, most of us must be pragmatic. For the first time, we are going to be dealing with the word, BUDGET. We want to see how close to our Q9550S at 4.0 GHz that we can come performance wise, while building a completely new PC that is not only a competent gaming performer at 1920×1200, but one that won’t break our bank.