We completed the AMD Graphics’ HD 6000 series versus Nvidia’s 500 series evaluations from their top dual-GPU $750 monster cards down to their entry level video cards, months ago.  Both companies have mostly completed their impressive line-up and we see their partners mostly attempt to differentiate one brand from another with features.  However, today we are going to look at Nvidia’s GTX 560 Ti as a brand-new 448 core limited edition.

In January, we introduced the original 384 core Titanium GeForce GTX 560 Ti as Nvidia successfully positioned it against AMD’s HD 6950.  This time, we are introducing the EVGA GTX 560 Ti 448 Core GTX as a limited-edition version of the regular 384-core GTX 560 Ti that promises to bring more firepower to Nvidia’s lineup that when overclocked, may even challenge the much more expensive HD 6970. 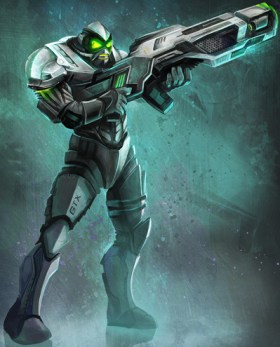 The new GTX 560 Ti with 448s core is a very interesting GPU and reminiscent of the GTX 260’s two major core editions.  It doesn’t replace anything.  Technically, the GTX 560 Ti is Nvidia’s “Hunter”, but in this case it has been partially upgraded to a Tank.  It comes equipped with more armor and firepower than the regular Ti yet is slightly lighter than the GTX 570 at stock clocks.  And it is priced accordingly from $289 to $310, depending on its clocks and features.  There is no reference version and each of Nvidia’s partners who has this GPU is free to overclock it as they see fit.  And as we shall see, overclocking may be a game changer.

These 448 core GPUs form the basis for a very limited edition of the GTX 560 Ti that is available only in a few geographic areas including Europe and North America, but not in Asia.   Also, because of limited supplies of the GF100 GPU that is used to power this 448 core GTX 560 Ti, only a few of Nvidia’s partners will be selling them: Asus, EVGA, Gainward, Gigabyte, Inno3D, Palit, MSI and Zotac. 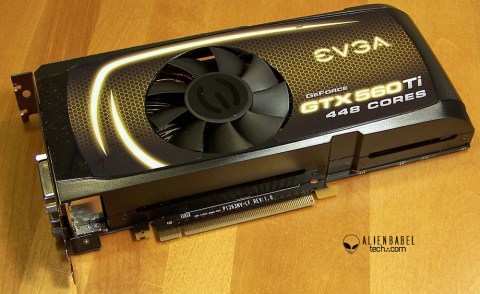 EVGA has two versions of the new 448 core GTX 560 Ti – the FTW version for $289, and the Classified Edition for $299.   Both Ti’s are factory-clocked at the same 797/3900MHz – well above Nvidia’s reference clocks of 732/3800MHz.  The 448 Core EVGA GTX FTW 560 Ti which we are reviewing today (above) is similar in form to the regular EVGA GTX 560 Ti, while the Classified edition (below) is built for more extreme overclocking by being equipped with dual fans and with 8-pin+6-pin PCIe connectors instead of the two 6-pin connectors that the FTW version uses. 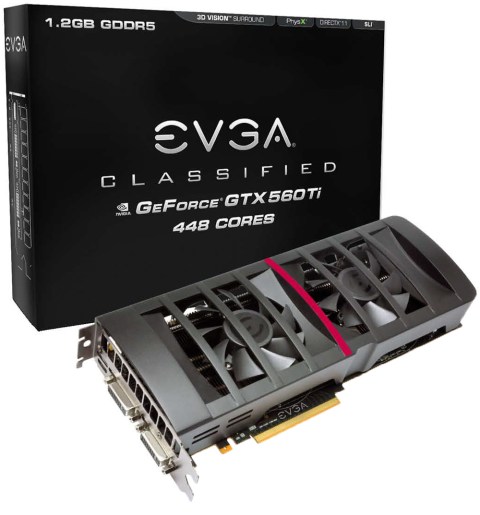 We will attempt to determine today if the new GTX 560 Ti 448 core video cards are worth the price premium over the regular GTX 560 Ti and how close into tank territory – into that of a GTX 570 – an overclocked GTX 560 Ti-448 Hunter will encroach.  And of course, we want to see it benched against its arch-enemy, the Radeon HD 6950-2GB and even see how it will perform overclocked against the HD 6970, AMD’s top single-GPU card.

We are going to use our mildly overclocked Galaxy GTX 560 Ti as the baseline for minimum performance in this evaluation as lower-end cards require lower settings and resolutions.  There really are no other competing cards in the new 448 core GTX’s approximately $300 price range.  The HD 6870/6850s are priced below $200 and they compete with the vanilla GTX 560 and the GTX 550 Ti, while the HD 6970 is priced well over $300 and competes currently with the GTX 570.  The GTX 580 is also used in our evaluation although it is priced by itself, well above the HD 6970 pricing.

For the new 448 core GTX to be a good value at its reference clocks, it needs to be solidly faster than the HD 6950 and it should come very close to the performance of the GTX 570.  We want to see if Nvidia and their partners have put together a good deal for their customers and we also want to look at the price pressure that they will bring on AMD’s bread and butter high end – the HD 6950 – as well as the HD 6970.

Here is what Nvidia told reviewers to expect regarding performance:

One important thing to note is that this is not a new “GTX 565” or a “Lite” GTX 570, although either designation might work if it were a regular production card instead of a limited run.  It appears that Nvidia saw a very clever way to sell a large amount of GF100 lower-binned chips with 448 cores at a premium that would otherwise be wasted or downgraded even further for lesser video cards.  The new 448 core GTX 560 Ti is a one-shot deal for the holidays and there will be no more when they are sold as it makes no sense to downgrade GPUs with more than 448 cores for the GTX 560 Ti.

The older GF114 384 core Galaxy GTX 560 Ti that we are using as the baseline reference to compare the new EVGA 448 core GTX 560 TI FTW edition with, is currently $199 after $35 MiR at Amazon.com.  It is very mildly factory overclocked +13MHz on the core which gives a small performance boost over the stock clocks of 822/2004MHz and we reviewed it here.  Here are the specifications for the standard 384-core GTX 560 Ti as Nvidia released it this last January: 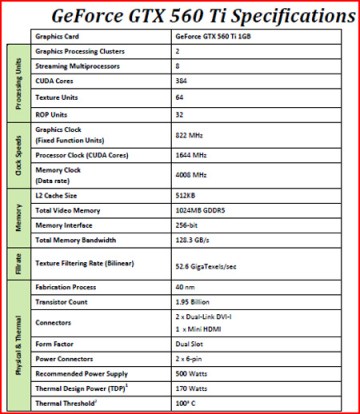 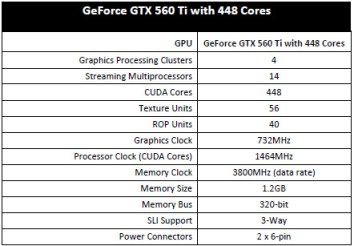 We note the amount of processing clusters has doubled in the new GTX based on GF100, the original Fermi, and we have a few less texture units overall but more ROPs and the memory and core clocks are also reduced.  The memory interface is wider in the new GPU, and SLI support has been increased to triple GPU, up from double in the regular GF114 GPU used in the 384 core GTX 560 Ti. 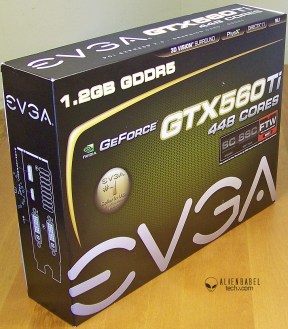 Let’s take a look at the specifications for the card that we tested: 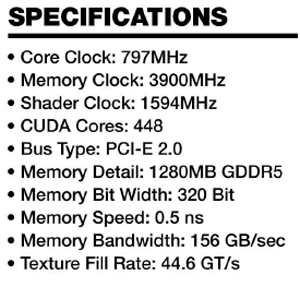 EVGA clocks their FTW (and Classified) core at 797MHz, +65 MHz over the stock 732MHz clocks.  The vRAM is clocked up from the stock 3800MHz (1900MHz x2 data rate) to 3900MHz.   And of course, we want to see if we can clock it even higher and what performance improvements it might bring over the stock and EVGA overclocked settings.

We want to put to determine what this new 448 core GTX 560 Ti video cards brings as we continue to focus on gaming performance.  We are going to test the new card against the 384 core GTX 560 Ti, the GTX 570 and even the GTX 580.  And we shall not neglect the HD 6950 and HD 6970 as we test 21 modern games at the highest playable resolutions and details to show which cards make the grade.

Since we are using upper mid-level to high-end enthusiast GPU video cards, it makes sense to test them at their highest playable resolutions and with the most demanding playable settings that they can handle. And of course we will attempt to find playable settings bearing in mind that the new GTX is aimed approximately at 1920×1080 resolution and above. Let’s take a close look at our new EVGA GTX 560 Ti 448 core FTW card.  Head to the next page for the unboxing.