[ABT Exclusive]TMobile’s "Project Emerald" is HTC Glacier, has a dual-core Snapdragon CPU, three times faster than EVO 4G and benchmarks!

UPDATE: HTC Glacier seems to have been removed from the GLBenchmark website results database. But all the pictures here show the results and details that were available on it.

NOTE: The benchmark results below are for “GLBenchmark Pro ES 1.1 CPU Skinning” which is a CPU test. From the official description of this test, we believe that this test uses software skinning for character animation which is calculated entirely on the CPU. This would make this a test of the device’s CPU and not the GPU.

With the evidence that we present to you below we can safely say now that TMobile’s fabled “Project Emerald” is in fact the rumored HTC Glacier. HTC Glacier might be a codename for internal testing, and may change before release but we can safely agree on few important details about the hardware.

While browsing the GLBenchmark 1.1 results database, I came across a curious result for a device name I had not heard previously, the “HTC Glacier”. The benchmark score is very impressive for a HTC Device, as no other top 1 GHz Snapdragon smartphone is anywhere near this result. Have a look at the score compares to few of the other top smartphones and the venerable HTC G1 that started it all for Android.

Recently, Qualcomm issued a press release that it had begun sampling the third-generation dual-core Snapdragon’s to partners. Now, it’s well known that HTC uses Qualcomm chipsets and SOCs in it’s smartphones which would put it in a prime position to receive these new snapdragons from Qualcomm.

So why do we believe that HTC Glacier contains this new dual-core Snapdragon ?

Look at the EVO 4G (powered by a 1 GHz Snapdragon) score on the CPU test, 516 frames. The HTC Glacier’s score is 1432 frames which is around three times that of HTC’s fastest device at present. This can only be achieved by a dual core CPU.

Let’s assume that the score would increase linearly with clock speed of the CPU and would double for 2 cores.

So, let’s assume that the HTC Glacier has the new dual core 1.2 GHz Snapdragon. Multiply 516 by 1.2 to get the score for a single core and multiply with 2 since the CPU has two cores. Here’s the math below in a nutshell.

These extra 193.6 frames could have come from architecture tweaks made by Qualcomm to it’s Snapdragon CPU.

So, let’s assume that the HTC Glacier has the new dual core 1.5 GHz Snapdragon. Multiply 516 by 1.5 to get the score for a single core and multiply with 2 since the CPU has two cores. Here’s the math below in a nutshell.

So by the above scenario, the score is lacking by 116 frames. This could be explained that the benchmark might not be able to take full advantage of both cores and might need some work on optimizing it for dual core architecture.

It is interesting to note how close the score of the single-core Hummingbird processor in the Samsung Vibrant is to this new dual-core Snapdragon processor.

How can we say this is T-Mobile’s Project Emerald ?

We do not have explicit confirmation on this, but our investigation has lead us to believe that this phone is definitely headed to T-Mobile. The rumors that we have heard from people and around the internet have indicated that “Project Emerald” is a dual-core CPU HTC device, which is why we are putting our money on HTC Glacier to be the “Project Emerald” device.

The user that uploaded the results for this phone to GLBenchmark.com, used the username “mbibik”. Have a look at the history of devices tested by”mbibik”. 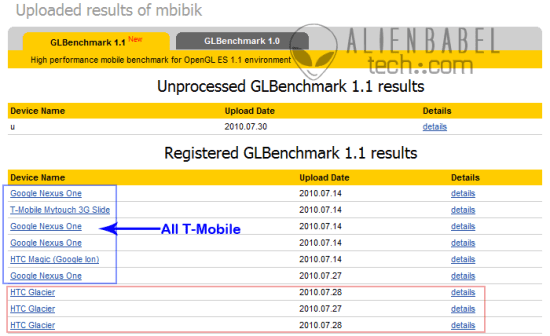 All the previous devices tested by this user have two things in common. They are made by HTC and are sold by T-Mobile in the USA. A quick search for “mbibik tmobile” brings up few results, one of which is the this LinkedIn profile of “Mike Bibik”.

And Voila! Mike works at T-Mobile. So all this evidence points to HTC Glacier arriving on the T-Mobile in the near future. Given HTC’s latest success with big screen phones (HTC HD2, EVO 4G are sold out everywhere), I would expect this to continue the trend especially with the HD2 being discontinued on T-Mobile. 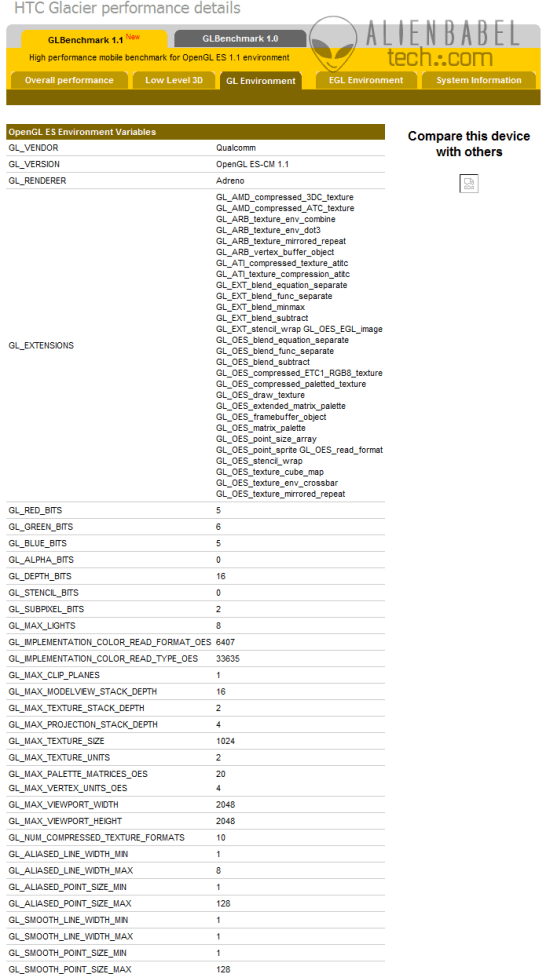 For a detailed analysis on the Snapdragon, Hummingbird and OMAP architecture please read the following articles.

Ruminations on various benchmarks for the OMAP 3600s, Hummingbird, and Snapdragon